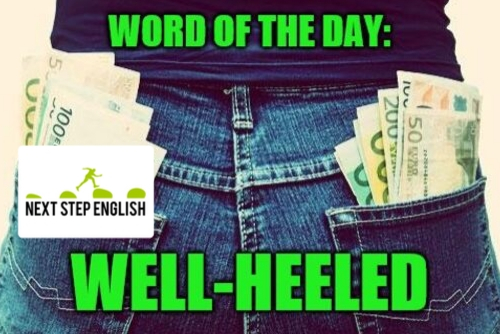 (informal) having a lot of money

🙂: Everyone gives me a lot of credit for starting my business, but the fact is that I had a pretty well-heeled start. My dad gave me half a million dollars when I finished my degree, and that took a lot of the risk out of the equation.

😮: Wow! I actually had no idea! What a lucky break!

😔: Erin and I get along great, but I’m nervous about meeting her folks. They’re pretty well-heeled, and I’m worried that they’re going to look down on someone like me.

🥰: What do you mean someone like you? You mean intelligent, kind, handsome, hilarious? You’re great, and if they don’t see that, they’re crazy.

Examples of ‘Well-Heeled’ from the News

“The district spends nearly $20,500 per student, more than any other district in a region flush with well-heeled public schools.”
– Debbie Truong, “Arlington schools were named best in Virginia, but a growing chorus of black parents is disrupting that narrative”, 22 September 2019

Special Notes on the Word ‘Well-Heeled’

In English, we have a lot of synonyms for ‘wealthy’ in addition to ‘well-heeled’. Here are just a few!

Related: Learn more about another informal synonym for rich in this word of the day post