When you are learning a new verb, one of the most important things to learn about that verb is whether it is transitive or intransitive. Transitive verbs have direct objects. Intransitive verbs do not need objects.

Look at these two examples:

Example 1 is transitive. Joy makes something. What does she make? Breakfast. Breakfast is the direct object of make.

Example 2 is intransitive. There is no direct object. We don’t need more information to understand what Clara does. She exercises. This is a complete idea. 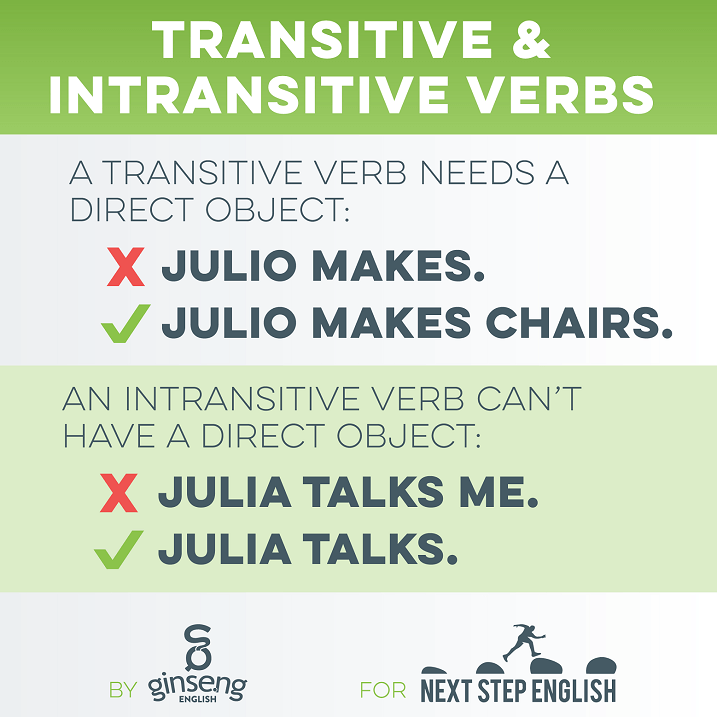 How do I know if a verb is transitive or intransitive?

Most dictionaries contain this information somewhere at the beginning of the definitions of verbs. Why is it important to know if a verb is transitive?

When we learn a new word, it is very important to learn not what a word means, but how to use it correctly in a sentence. So many students study definitions and can pass a multiple-choice test, but they can’t correctly use any of these words. We learn English to speak it, not to pass tests, right? So let’s take a look at a couple of examples to see how we can apply this knowledge.

What do you think of this example:

Is this a good sentence? If your friend says I have to you, you probably will respond by saying You have what? The reason you respond this way is that have is a transitive verb. You need to have something. Just saying I have is an incomplete thought without an object.

One more example. Let’s say you are learning a new word: discriminate. You learn the meaning, to unfairly treat one type of person differently from another type. But then you try to make a sentence, and it isn’t correct. You say, Some people discriminate women when hiring for jobs. The problem here is that discriminate is an intransitive verb, but we have given it a direct object, women. We can’t do that. Intransitive verbs cannot have direct objects. We need to use the preposition against if we want to answer the question Who? The correct sentence is Some people discriminate against women when hiring for jobs.

We need to know whether a verb is transitive or intransitive before we can use it correctly.

Here are some example sentences with intransitive verbs:

Transitive verbs are action verbs that have a direct object. Some of the most common ones are make, do, and have:

She is making a lot of money.
I did my homework already.
We have a big family.

In all these examples, the transitive verb is in bold, and the object is underlined.

Can a Verb Be Both Transitive and Intransitive?

Clara exercises in the morning.

Exercise is intransitive in this sentence because it has no object. But we can use exercise in a different way:

Clara exercises her legs in the morning.

Now we have an object. What does Clara exercise? She exercises her legs. Legs is the direct object here, so exercises is transitive in this sentence. And if you look up exercise in your dictionary, you’ll find two definitions, with and without an object: Many words, like exercise, can be used both with and without an object

Linking Verbs are Not Transitive Verbs

If you just look quickly, they both seem to be transitive verbs in the present progressive. Rice and sick both look like direct objects.

But look again. A direct object is something that receives the action of the verb. This describes rice. Rice is the thing being cooked. But not sick. Sick is a feeling, describing Joni. Feeling is not an action verb here, it’s just connecting the subject, Joni, with an adjective describing her, sick. We call verbs that do this linking verbs. And that adjective, sick, is not a direct object; it is called a complement.

Sentences with linking verbs and complements look like transitive verbs with objects, but they are different. If the verb is just connecting the subject with another word describing the subject, it’s a linking verb. 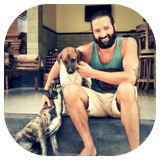 Rob is the founder of Ginseng English. He has taught English for over 10 years to students around the world. He loves teaching grammar and pronunciation.