No one is exactly sure what the Native Americans and Pilgrims ate at the first Thanksgiving meal in 1621, but historians have suggested that the feast probably included:

Today, Thanksgiving dinner is quite different. We no longer associate seafood with Thanksgiving, and eating swan is now unheard of. We’ve also added some dishes that definitely wouldn’t have been present at the original feast. The typical Thanksgiving menu today was popularized in the 19th century and has become entrenched in American culture since then.

In this post, you’ll learn about 12 foods that you might see in a typical Thanksgiving dinner nowadays. Numbers 5, 9, and 12 are my favorites!

What are your favorites? Tell us in the comments! 🙂 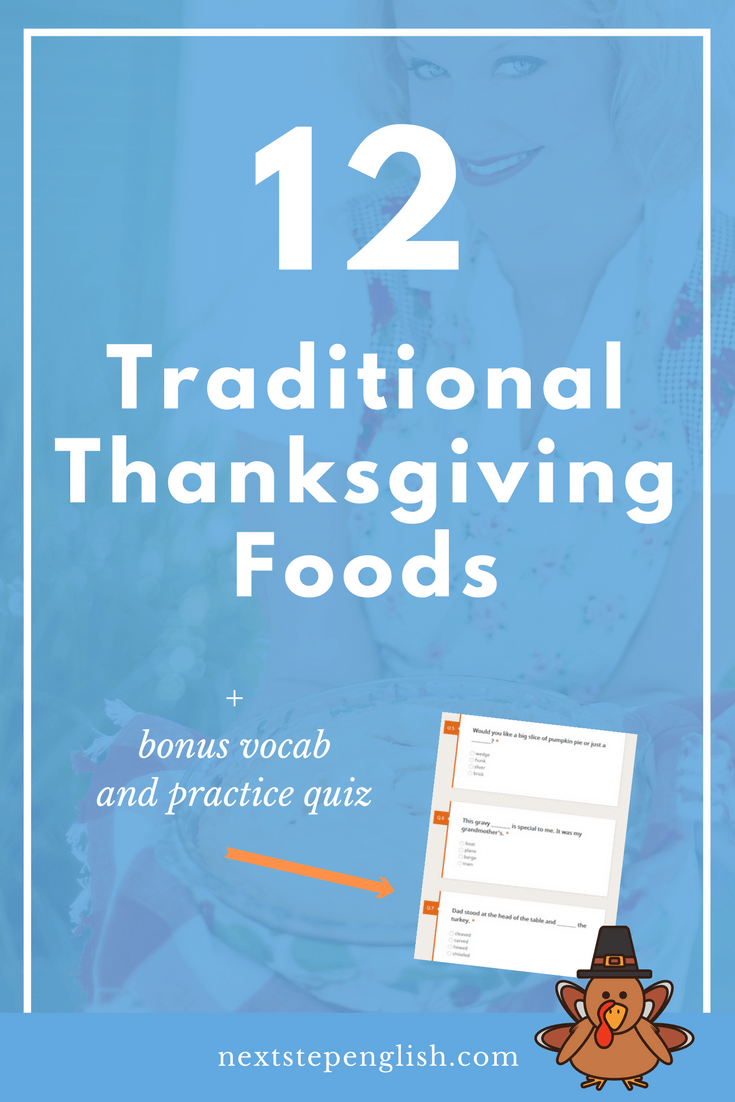 No traditional Thanksgiving dinner would be complete without turkey! In fact, in informal conversation, some people refer to Thanksgiving as Turkey Day.

Roughly 46 million turkeys are eaten each year on Thanksgiving. One lucky turkey escapes, though, because it is pardoned by the U.S. President! You can read more about the 2017 turkey pardon here.

baked / roasted / fried
Turkeys are usually baked or roasted in the oven, but sometimes they’re fried in a deep fryer.

platter
Turkey is usually served on a platter, a large plate that is used for serving food.

carve
In some families, it is traditional for the oldest male family member to carve the turkey. In my family, my father carves the turkey.

white meat / dark meat
My grandmother likes white meat from the breast, but I prefer dark meat because it’s juicier.

wishbone
The wishbone is the v-shaped bone between the neck and the breast of a turkey. Chickens and ducks also have wishbones. When the bird is eaten, it is traditional for two people to pull apart the wishbone. Whoever gets the larger part can make a wish.

Stuffing is another one of the most popular Thanksgiving dishes!

There are various ways to make it, but it usually consists of finely chopped breadcrumbs, onions, and herbs that are stuffed inside the turkey and cook with the turkey inside of the oven.

Stuffing usually has a mushy texture, and it takes on a lot of flavor from the turkey.

Mashed potatoes are another staple of any traditional Thanksgiving dinner. They are also very easy to make!

White potatoes originally came from South America, and they had not yet made their way to North America in 1621. So, although mashed potatoes are now popular at Thanksgiving dinner, they would not have been present at the original feast.

spuds
Spuds is an informal word for potatoes. On Thanksgiving, you might hear someone ask you to “pass the spuds.”

fluffy
Unlike a baked potato, mashed potatoes are fluffy. Their texture is soft and light.

Gravy is a brown sauce that we make by adding flour to the juices that come out of the turkey while it is cooking.

On Thanksgiving, it is traditional to eat gravy with the turkey, stuffing, and mashed potatoes.

gravy boat
Gravy is traditionally served in a gravy boat, like in the GIF. You pour the gravy directly from the gravy boat onto your food.

Cornbread is one of my favorite Thanksgiving side dishes! It’s a type of bread made from corn flour, and it has a cake-like consistency. You can make it sweet or savory, and it is delicious both ways. I usually eat it with a little bit of butter on top.

It’s also common to have rolls on Thanksgiving. My family serves both cornbread and rolls, but I only eat the cornbread.

At the first Thanksgiving meal, the Pilgrims didn’t have butter or wheat flour, so whatever bread they had would have been made out of corn. They would not have had rolls like this.

Another common Thanksgiving food is the sweet potato casserole. It’s served as a side dish, not a dessert, but it is very sweet.

Sweet potatoes originate in the Caribbean and, like white potatoes, they had not yet arrived in North America in 1621.

Butternut squash is a typical Thanksgiving food, and it can be prepared in a variety of ways. It has a soft texture and a sweet flavor.

chunks
My favorite way to eat butternut squash is chopped into chunks and baked in the oven. A chunk is a thick, solid piece that has been cut or broken off from something.

purée
It’s also common to purée butternut squash with a blender and make it into a soup.

My husband loves some Thanksgiving foods, like turkey and pumpkin pie, but he detests jellied cranberry sauce. He actually calls it an abomination!

My husband is wrong on this. Jellied cranberry sauce is fabulous!

Unlike a marinara sauce or an alfredo sauce, jellied cranberry sauce isn’t poured over anything. We eat it by itself as a Thanksgiving side dish. My family cuts it into slices, and we usually eat two to three slices each.

Although they may have had cranberries at the original Thanksgiving meal, this method of preparing cranberries into a jellied sauce had not yet been invented when the Pilgrims and Native Americans sat down together for the first Thanksgiving.

bog
Cranberry bushes grow in bogs. A bog is an area of wet, soft ground formed of decaying plants. When it’s time to harvest the cranberries, farmers flood the bogs, and the berries float to the top.

Apples are very much an autumn fruit because most apples are harvested between September and November.

A traditional Thanksgiving dinner will often feature spiced apples. Spiced apples are cooked with cinnamon, nutmeg, and other spices. Once cooked, the apples become soft. We often serve them warm, and they can either be a side dish or a dessert.

Related: 5 Idioms and Proverbs about Apples in English

At the end of a Thanksgiving meal, you’ve got to have a slice of pie. While we eat a variety of pies at Thanksgiving, the two most common are apple pie and pumpkin pie.

My mother’s apple pie is famous within our extended family. It’s the best I’ve ever tasted.

Pies were popular in England in the 17th century, but the Pilgrims and Native Americans didn’t have access to wheat flour or butter. Even though pies are an essential item on any traditional Thanksgiving food list today, there wouldn’t have been any pies at the first Thanksgiving! They wouldn’t have been able to make the dough for the crust!

pre-made / from scratch
Although you can buy pre-made pie crusts, my mother usually makes the dough for her pie crusts from scratch. She mixes all the ingredients and rolls the dough out herself.

slice
Like pizza, pie is cut into slices before it’s served.

sliver
If you would only like a very thin slice, you can ask for a sliver of pie.

Pumpkin pie is probably my all-time favorite Thanksgiving food. I’m not proud of this, but I once ate an entire pumpkin pie in one day!

dollop
People often eat pumpkin pie with a dollop of whipped cream, like in the GIF. A dollop is a lump of soft food, often dropped from a spoon.