Why is English so Crazy?! A Brief History of the English Language Have you ever wondered why the English language is so inconsistent with its spelling and pronunciation? Learning about the history of the English language will help you start to understand why English is so crazy, but also what makes its vocabulary so rich. A lot of it has to do with two things:

(1)   English is a hodgepodge of many languages: Celtic languages, Germanic languages, Old Norse from the Vikings, Latin, French, and more!

(2)   We see the English language starting to be written between around 450–480 A.D., but English spelling wasn’t codified for centuries. Even Shakespeare spelled the same words in multiple ways throughout his plays. In fact, he had various ways of spelling his own name!

For an introduction to how English has evolved over the years, take a look at our Brief Timeline of the English Language:

An English sentence may contain words from Celtic languages, Anglo-Saxon, Latin, Old Norse, French, and many others! As Dr. Jennifer Paxton said in her audiobook about the Norman Conquest, English is “a language where you can read the history of a people in every single sentence.”

Related: Learn 8 Yiddish Words that English has Adopted, and How to Pronounce Them

Understanding the history of English isn’t going to help you become fluent in English faster, but it will help you take one step towards understanding why the English language is so inconsistent when it comes to spelling and pronunciation. The English language is like a stew made from every ingredient in the pantry. But don’t be too irritated with English. The same thing that makes English so frustrating with regards to spelling and pronunciation is what makes it so rich in other ways.

The vocabulary of the English language is rich, expressive, and diverse, and it would not have been the same without so many distinct influences. By way of example, here are just a few different words to do with laughter: 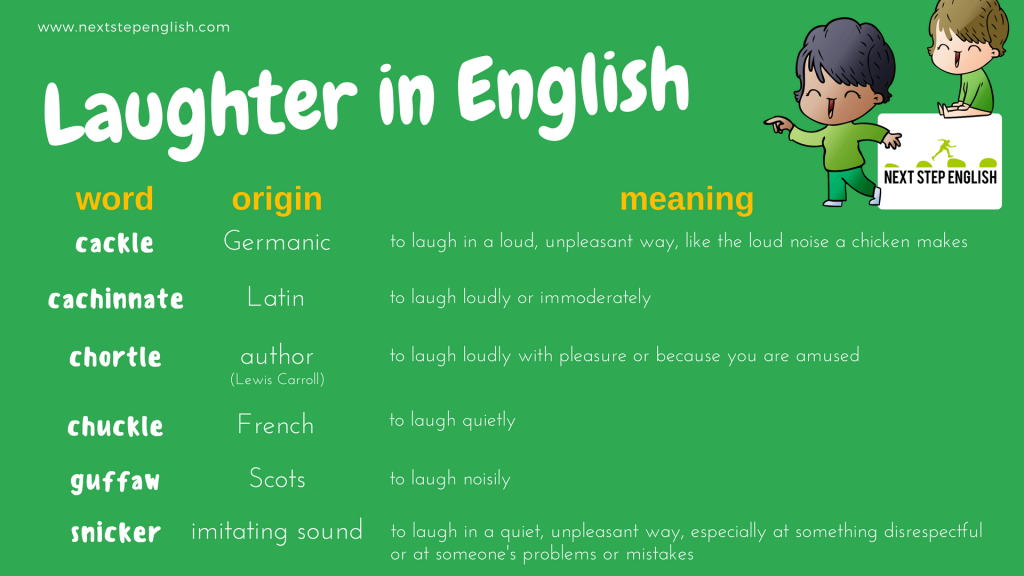 Do you know any words that have come into English from your native language? Share them with us in the comments!