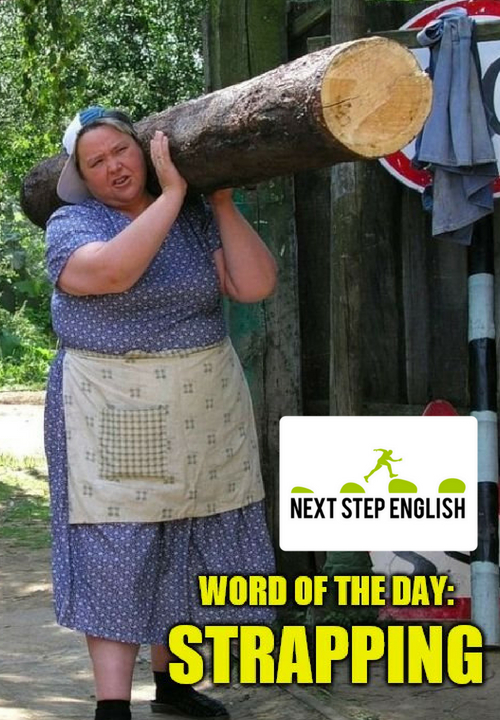 🙂: Hey, Tommy! Could you help me move this weekend?

😄: What do you want an old man like me for? What you need is a couple of strapping college kids. You could probably find some to do it in exchange for twenty bucks and a pizza.

🥰: How are things going with you and Javier? Are you guys official now?

😬: Honestly, he’s getting serious, but I’m not sure how I feel. On the one hand, he’s a strapping Adonis with rippling muscles and a deep, throaty voice. But on the other, there are termites who could probably score higher on an IQ test. I really ought to let him go, but then I see him, and I can’t stop drooling!

Examples of ‘Strapping’ from the News

“It didn’t look like it was going to be a fair fight. In one corner was a strapping fellow in his late teens or early twenties. He stood well over six feet tall, all lean muscle. In the other corner was Emilio Galindo, 50 years old, graying, plump, and all of five-foot two.”
– Barry Estabrook, “Ethically Grown Tomatoes: Coming to a Market Near You”, 19 October 2010

“‘It would have taken a couple of strapping chaps and a trolley to shift. It probably has not much in the way of financial worth but its historic value is beyond calculation,’ Mr. Connolly said.”
– BBC News, “Ancient 17th Century bell stolen from old Skelton church”, 4 May 2019

Special Notes on the Word ‘Strapping’

I chose ‘strapping’ to be a word of the day because it’s one of those words that native speakers would not expect to hear from someone with an accent. It’s also got a playful tone to it, so it’s not only a word that will surprise native speakers, it’s also one that might make them smile.

A similar word is ‘brawny‘, which means “having strong muscles”. And do you know what’s fun about ‘brawny’? It rhymes with its opposite, which is ‘scrawny‘! A scrawny person is very thin in a way that is not attractive.

In Disney’s Beauty and the Beast, the bar sings a song praising Gaston, a strapping imbecile:

Women: For there’s no one as burly and brawny!
Gaston: As you see, I’ve got biceps to spare!
LeFou: Not a bit of him’s scraggly or scrawny!
Gaston: That’s right! And every last inch of me’s covered in hair!

Did you catch that? Another synonym for ‘strapping’! A burly man is big, strong, and heavy.

Related: Examples of Adjectives and How We Use Them