The Ultimate Guide to the Preposition Chez in English (with Quiz!)

About a third of all English words come from French as a result of the Norman Conquest in 1066. But English has adopted many French words since then, as well. From the Norman Conquest, we have words like dine and reside, which now sound completely English. No one thinks of the French origin of these words when they use them in conversation. However, the French connection is still apparent in some words that were adopted more recently. Today, we’re going to examine the English preposition chez, which we adopted directly from French in the 18th century. The first known usage of chez in English occurred in 1740. When we use this preposition today, we still give it a French pronunciation, and we are still very much conscious of its French roots.

Related: Why Is English So Crazy?! English is a Hodgepodge of Many Languages!

While English learners quickly learn the more common prepositions, like at, in, on, etc., chez is not often taught because it’s not as common. In a Twitter quiz, only 5% of participants correctly chose chez:

😊: They like to make people feel at home __ Juanita.#prepositions

In this post, we’ll review the meaning and pronunciation of chez, then we’ll look at the four most common ways it’s used in modern English.

What does chez mean in English?

Chez cannot stand alone. It must always be followed by an object, usually a name or a French object pronoun. (More about this below!)

INCORRECT: Is anyone chez?
(Instead, we would say, “Is anyone at home?”)

It is far more common to say “at Nelly’s house” than it is to say “chez Nelly”, but chez can have a playful tone that adds verve to your speech. You will also sometimes hear it in movies and TV shows, so even if you choose not to use it, it’s useful to understand it.

WARNING: Although chez can make a delightful addition to your speech, you must be careful when you use it because it can sound pretentious. I recommend only using it when you’re being playful or humorous. You don’t want people to think you’re a snob. :o) Try smiling and having a twinkle in your eye when you use it so people know that you’re being playful and not pretentious.

How do you pronounce chez in English?

Because we are consciously imitating French when we use the preposition chez in English, this word has retained its French pronunciation. We pronounce it SHEY.

One of my favorite ways to remember how to pronounce words in English is to think of rhyming words. Here are a few words that rhyme with chez in English: 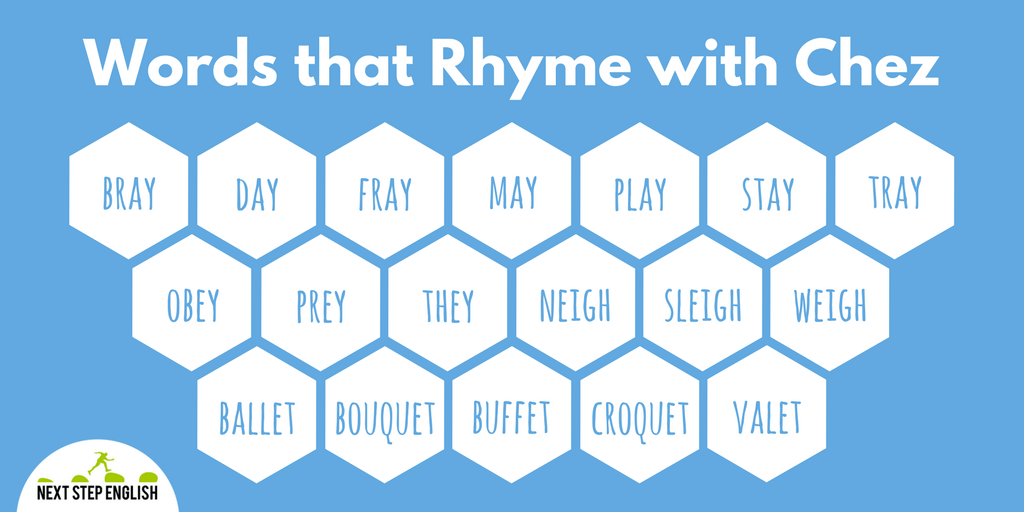 To remember the pronunciation of chez, you can say this rhyme to yourself:

What shall they do today chez Renée, crochet, ballet, or play croquet?

Related: How to Pronounce SCH- Words in English (with Video)

(At) chez + first name is the first formula for using chez in English.

NOTE: Because chez means “at the house of”, using at before chez is technically redundant. However, we do say it.

Here are a few examples:

You can also use this construction: at chez + last name. If you follow chez with a last name, you are referring to a family’s home instead of an individual’s home. For example, “chez Smith” means “at the home of the Smith family”.

Oftentimes, we use this construction to refer to ourselves in the third person. In this case, it could also mean, “at our house”.

Unlike the first formula, we almost always use at before chez in this construction. 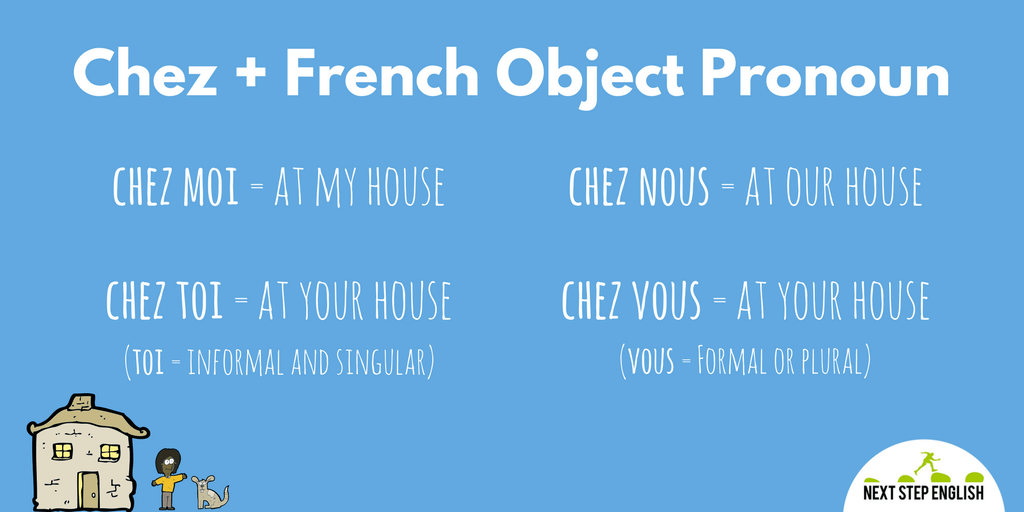 WARNING: This is the usage of chez that is most likely to be construed as pretentious, so be very careful if you choose to use chez in this way. However, as with the other uses of chez, it can be playful or humorous if you use it with a smile on your face and a twinkle in your eye.

Lastly, chez + first name often serves as the name for a French restaurant. Although not always the case, a restaurant named like this is often an expensive, high-end restaurant.

At Chez Maurice, you need to make reservations at least a month in advance.

Tim proposed to me in the garden area behind Chez Pierre.

I know a few of the waiters at Chez Claudette, and they say the chef there is an absolute tyrant.

The reviews of Chez Henri are spectacular. Have you ever eaten there?

Are you ready for the quiz? 🙂