Drop has a lot of meanings in English! Has anyone ever told you to drop dead after you dropped the ball on a project? Did you drop a bombshell on your mother when you told her you’d dropped out of school? Do you like the feeling of raindrops on your drop-dead gorgeous face? The most basic meaning of the verb drop is “to fall or allow something to fall by accident,” but this word forms part of many idioms and phrasal verbs in English.

In this post, we’re just going to focus on phrasal verbs. You will learn 5 phrasal verbs with drop and see them used in example sentences. At the end, test yourself with the quiz, then try making your own sentences in the comments! 1. Phrasal Verb: Drop In (On Someone)

If you drop in on someone, you pay someone a casual or unexpected visit.

Ali: You’re from London? That’s great! I fly there a few times a year on business.
Larry: No kidding! Feel free to drop in next time you’re in town.

Beatrice: No one has heard from Ashleigh in days. I’ve left her numerous messages, but she hasn’t called me back. Do you think she’s mad at us?
Phil: I doubt she’s mad, but she may be depressed. Let’s drop in on her this afternoon and see what’s up.

Patti: I had an interesting afternoon. Cheryl dropped in on me and wanted to chat.
Emma: She tried to stab you in the back just last month. I wonder what she wants.
Patti: I’m not sure yet, but she’s definitely up to something.

2. Phrasal Verb: Drop Out (Of School)

Someone who drops out of school leaves school before completing their studies.

This phrasal verb gives us a related noun, dropout, which is a person who has left school before completing their studies.

Conrad: It’s so hard to work and go to school at the same time. My parents never finished school, and they’ve become pretty successful with their business.
Mike: You’re a year away from graduating. Don’t drop out now.

Shelby: One of my students dropped out of school when she was just 15 years old because she got pregnant. Now 20 years later, she’s about to earn her master’s. I’m so proud of her.

Jake: I told you to only interview candidates who had graduated from Ivy League schools, and yet you’re suggesting we hire this guy? He’s a college dropout with a tattoo on his neck!
Rob: Let go of your prejudices for a second. He may have dropped out of college, but he’s been building websites since he was 12, and he’s got a brilliant mind. At least take a look at his work before you write him off. The phrasal verb ‘drop behind’ describes moving or falling into a position behind someone else. We can use this literally, like in a race or a queue, or we can use it figuratively to talk about falling behind a rival in business or in other competitive situations.

Andy: I really thought Earl Grey was going to win the race, but she dropped behind at the last minute and let Rapscallion take the lead.

Christine: Last quarter, we dropped behind Lowe’s in terms of sales figures. How can we boost sales this quarter so that we can take the lead again?

Danielle: You disappeared 10 minutes into the hike. Where were you?
Maria: I dropped behind so I could be by myself for a while. I’ve been stressed out lately, and I wanted some time to think without having to chat with everyone.

Do you want more help with phrasal verbs in English? Join our email family to get a free copy of our eBook, which will teach you 10 phrasal verbs using ‘get’ plus 30 ‘get’ idioms, and more!

If you drop off, you fall into a light sleep. There are a few other phrasal verbs that have similar meanings in English:

• doze off = to go to sleep, especially during the day

Sheela: I dropped off for a few minutes during the final act. How did Tosca die?
Nick: I can’t believe you could drop off during such spectacular music!
Sheela: Cut me some slack. I’ve been working long hours lately.

Victor: I can’t believe it. I got fired today.
Lloyd: Oh no! What happened?
Victor: I dropped off while I was supposed to be operating the crane. I never do that, but I was exhausted.

Kristin: I need to find a way to make my lectures more engaging. This is the second time I’ve caught someone dropping off during my class. When something drops away, it gradually becomes weaker in strength or fewer in number.

Carol: As I got to know him, my reservations about letting Mark watch my children dropped away. He turned out to be responsible, fun, and full of patience.

Hector: How did you lose so much weight? I need to do that!
Edith: You’re not going to reach your goal weight overnight, but if you focus on eating more fruits and vegetables and eliminating junk food from your diet, the pounds will eventually drop away.

Julia: After David announced that the deadline had been pushed back a week, you could feel the stress in the room drop away. 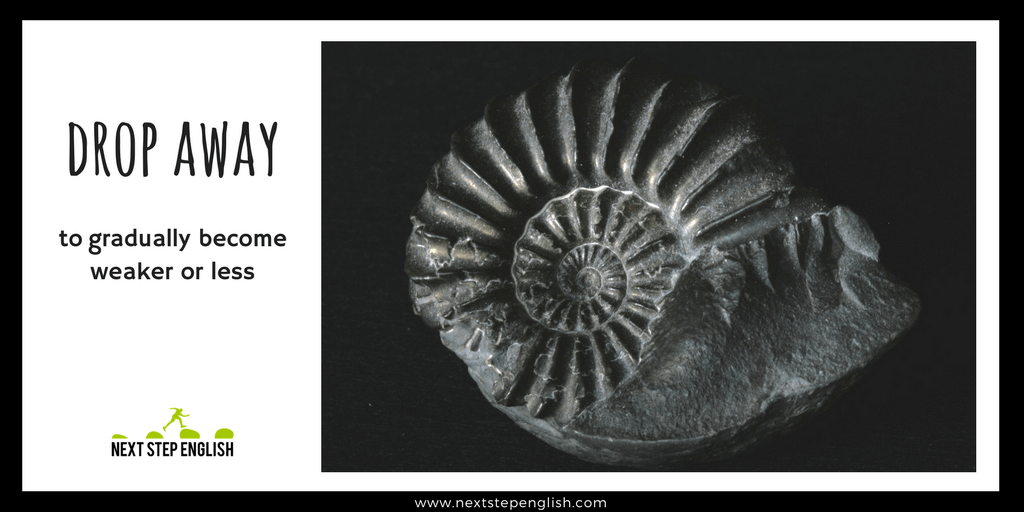 Share with your friends and challenge them to get 100%, too!

Related: 50-Question Exam on the Word Get in English (Including in Idioms and Phrasal Verbs!)