Help! Rodents are swarming Next Step English! 🐁😱🐁 (We may need Pincy Cat to return to ward them off, and soon! As we say in English, when the cat’s away, the mice will play.) But since they’re already here eating my cheese and nibbling at my power cords, I thought I’d ask them to help you learn some advanced vocabulary. Rats and mice feature in lots of idioms in English, and this week, we will look at 9 great mouse and rat idioms with meanings and examples, complete with an idioms infographic and practice quiz!

And don’t try to use your muriphobia as an excuse to skip this vocab lesson. (In case you’re wondering, muriphobia is the word for a fear of mice.) Courage, my friend! Are you a man or a mouse?!

When the cat's away, the mice will play. The mouse and rat idioms you will learn in this post are: Related: If you prefer cats to mice (I certainly do!), check out this post where Pincy Cat shares some of her most purr-worthy summer words! ☀️🐱

Mice are a bit cuter than rats (at least in the cartoons), so let’s start off this rodent-infested vocabulary post with mouse idioms.

(But brace yourself. The rats are coming!)

Mouse Idiom 1: PLAY A GAME OF CAT AND MOUSE WITH SOMEONE

If you play a game of cat and mouse with someone, you try to catch or defeat someone in a way that involves constant pursuit, near captures, and their repeated escapes. You are the predator, and they are your prey, but they’re going to make you use your skills in order to catch them.

Bartholomew: Did you enjoy school when you were a kid?
Sasha: Ha! I certainly did, but not because I was a great student. I was the worst child in the entire school, and for all of second grade, Mrs. Gordon and I played a game of cat and mouse. I pranked her all the time, and while she knew it was me, she could never quite prove it. I’d love to see her now . . . if she’s still sane! You probably recognize this next mouse idiom because of the famous Disney character. When we describe something as Mickey Mouse, we mean that it is amateurish, trivial, or not of high quality. This great idiom conveys a sense of disapproval, and we often use it in the longer phrase a Mickey Mouse operation.

Quincy: I’m sorry, Bill, but you’re fired. I can’t afford to keep cleaning up after some Mickey Mouse lawyer. This is a big case, and I need it handled by someone who knows what they’re doing. 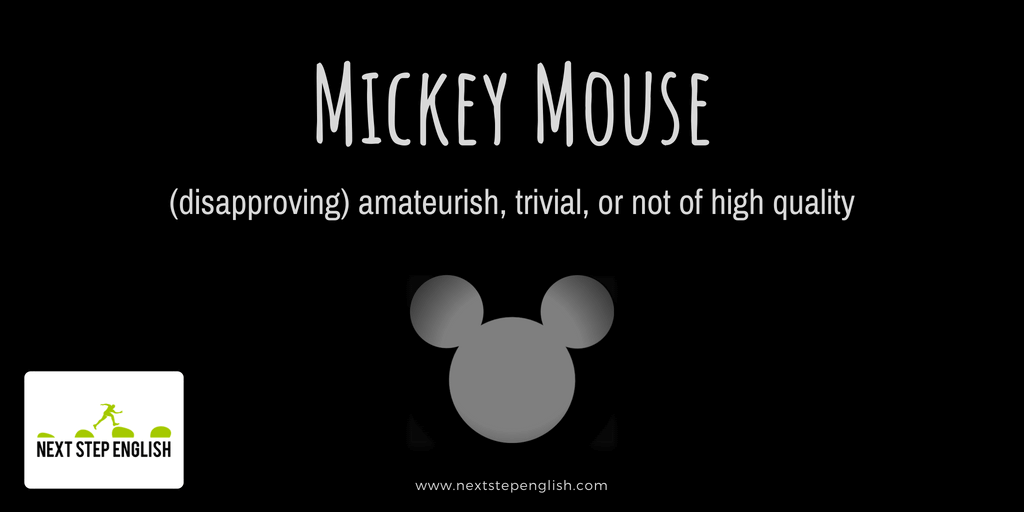 Related: My mother always jumps when she sees a mouse. Visit this post to learn 5 phrasal verbs with jump!

Mouse Idiom 3: ARE YOU A MAN OR A MOUSE?

Have you ever needed to help someone feel courageous in the face of difficulties? Then you could use this great idiom!

When someone asks you, “Are you a man or a mouse?“, they are giving you encouragement in a situation where courage is required.

This mouse idiom famously featured in the comedy 9 to 5, where one of the characters said, “Are you a man or a mouse? I mean, a woman or a wouse?”

Chris: I feel like my boss is taking advantage of me. He’s having me do the work of two people, but he hasn’t given me a raise in years! I’d like to ask him for more money, but I’m worried that—
Tyrone: Worried, schmorried! What are you, a man or a mouse? 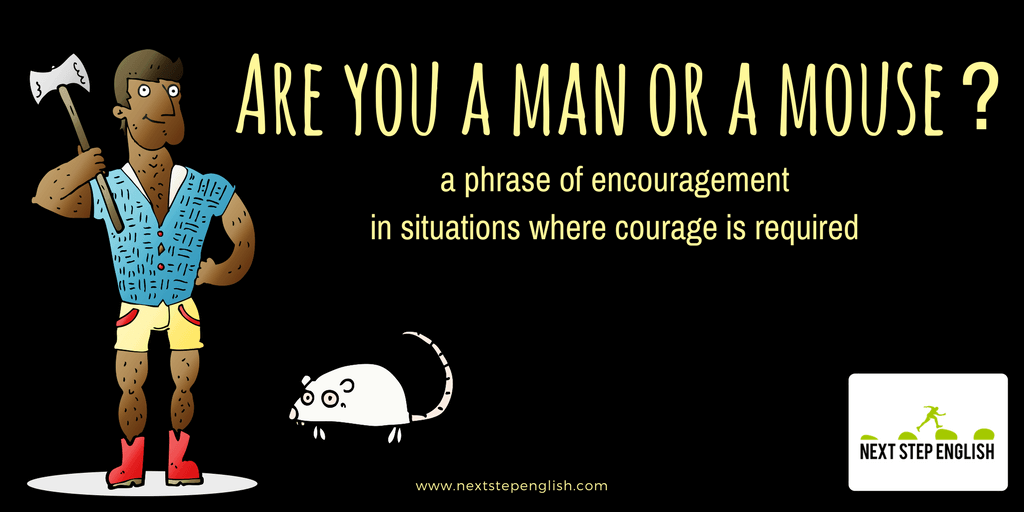 Related: Learn all about transitive vs. intransitive verbs in this post! You’re not afraid of a little grammar, are you? 😘

You’re three idioms down, and you’ve got six idioms with meanings and examples to go. Ready?

This isn’t just a great idiom. This is a stupendous idiom! I love imagining someone literally smelling a rat.

But, of course, with idioms, we’re not speaking literally. When you smell a rat, you suspect that something is wrong about a situation.

Dawn: I can’t believe it! My ex has been a real jerk, but he’s suddenly turned over a new leaf. He’s been sweet and accommodating, just like when we were first dating. It almost makes me wish we were back together.
Alice: Hmm. I smell a rat. He has been abusive towards you for years. If he’s suddenly being sweet, he wants something. Just be careful. Related: I don’t imagine that rats smell nice, but apples do! Learn 5 idioms and proverbs about apples! 🍎

The rat race is the way of life of people living and working in a large city where people compete in an aggressive way with each other in order to be more successful, earn more money, etc.

A high-powered lawyer in Chicago is living in the rat race. An organic dairy farmer in rural Virginia is not.

Michael: When I was younger, I thought having a penthouse apartment and a big salary was everything I needed to be happy. But the older I get, the more I fantasize about getting out of the rat race and living a quiet life in the country. The stress is too much!
Courtney: Yeah, the rat race never appealed much to me. I’m never going to be rich, but I’m happy the way I live. 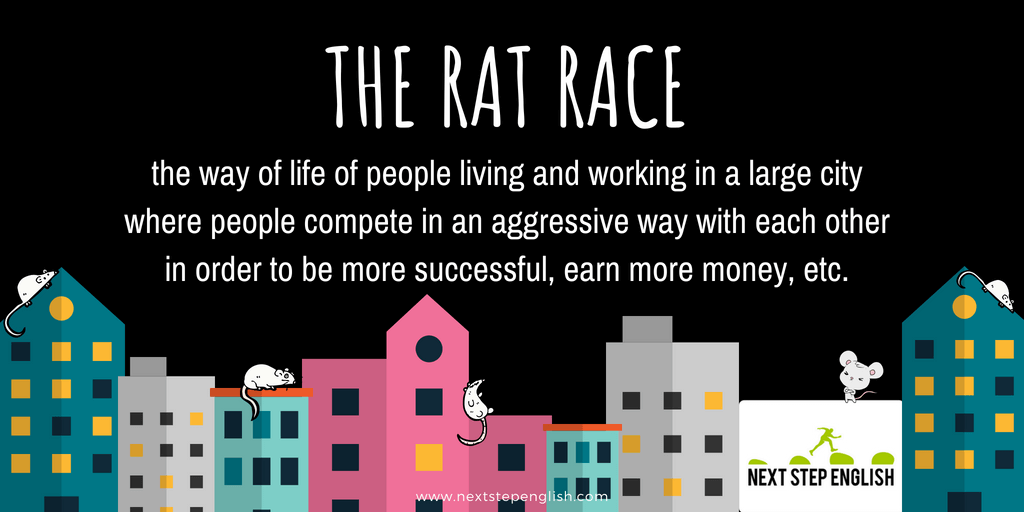 Related: If you want to make it in the rat race, you’d better learn to master the art of small talk. Start here!

This is one of the best exclamations that the English language has to offer. If someone says “Rats!“, don’t worry, there probably aren’t any actual rats scurrying about. This is an exclamation used to show that you are annoyed or frustrated about something.

We don’t use it when we are annoyed with people—you wouldn’t yell “Rats!” at your little brother for pulling your hair, for example. We’re more likely to use this if we’re annoyed about a situation, like losing power ten minutes before the season finale of Game of Thrones. You can also use this if you’re frustrated that you’ve forgotten to do something, done something badly, etc.

Harry: Rats! I can’t believe I just missed the train!

Keith: I followed him until we got into the middle of the city, but I lost him around Logan Circle.
Michelle: Rats! So we still have no idea where he was going!

Savannah: Rats! I was almost done with this scrapbook, and I just spilled lemonade over it! Do you have a relative that always says a certain word or phrase? When I was a kid, my Aunt Sharon always used this next idiom when one of us kids tattled on someone. She would scrunch up her face, stare down at the tattler, and say, “You rat fink!” with a smile in her eyes.

A rat fink is an informer or a traitor, someone you can’t trust because they’re going to rat you out. This has a playful tone to it, so we wouldn’t use it to talk about grave matters like actual treason against a country. A rat fink is the type of traitor that tells the teacher you were the one to put the whoopee cushion in her chair. A rat fink is the person who told the boss you were late because you’d been out all night drinking. A rat fink is the jerk who tells your mother that you haven’t been eating your vegetables now that you’re away at college.

Bonus Rat Idiom: RAT SOMEONE OUT

Betty: Hey, just a heads-up, I heard Todd telling the boss about how you were making fun of him at the company retreat.
Sean: That rat fink! I could tell a tale or two of my own if I were so inclined! 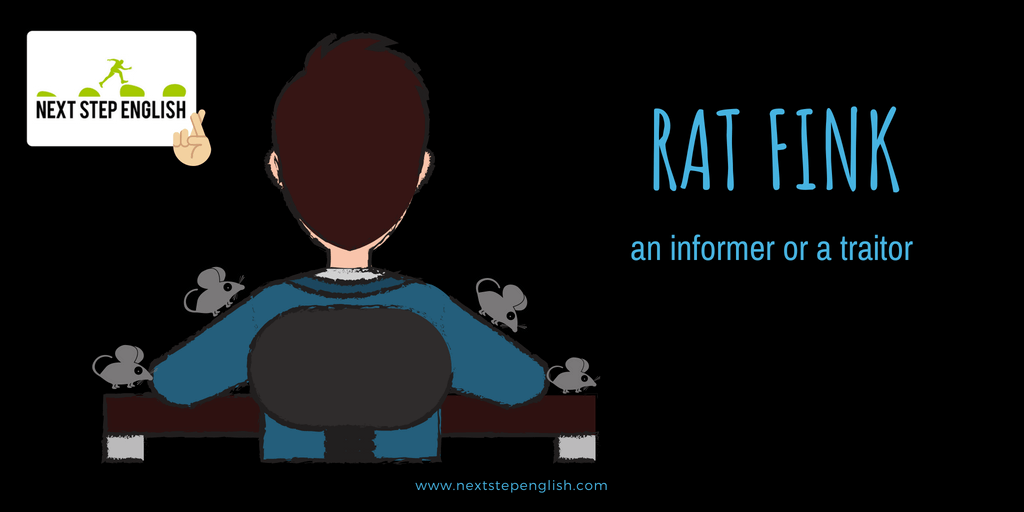 Related: Learn 18 words to describe your enemies in this Game-of-Thrones-inspired post!

In a literal sense, a lab rat is a rat that is specifically bred and kept for scientific research. By extension, when we say that a person is a lab rat, we mean that they are someone who allows other people to use them as a test subject in an experiment or study.

Will: Would you help me put up some fliers around campus? I need to get 20 – 30 more lab rats for my final project. 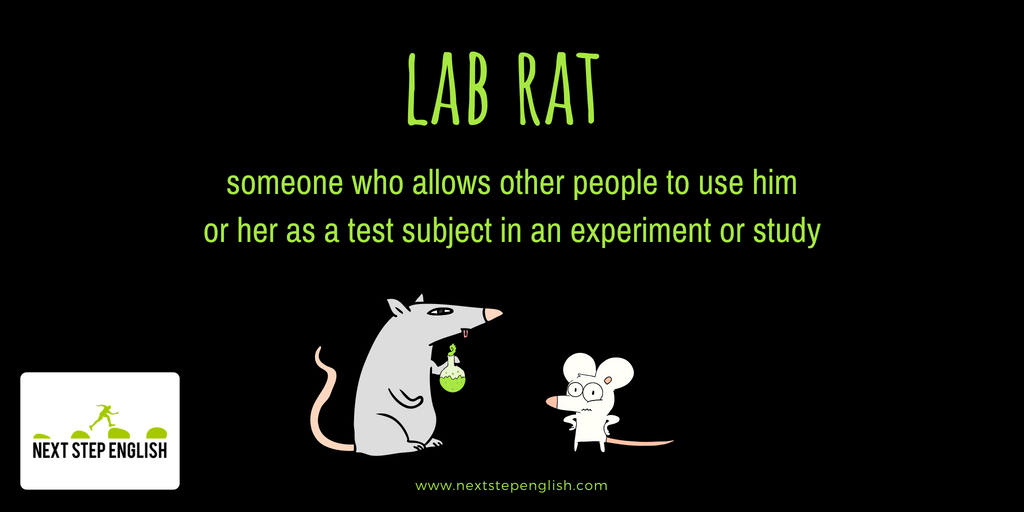 A pack rat is a person who collects and stores things that they do not really need. Think of a pack rat as the opposite of a minimalist, but not as extreme as a hoarder. Being a pack rat isn’t so extreme that it’s the result of mental illness. It’s more of a personality quirk, and it’s fairly common.

Billy: I wish I had some aviator goggles for this video! It’d be a great extra touch, don’t you think?
Gwen: You’re not going to believe this, but do you know who might have a pair? My grandfather! He’s a pack rat, so he’s got all kinds of random things hanging around his house. 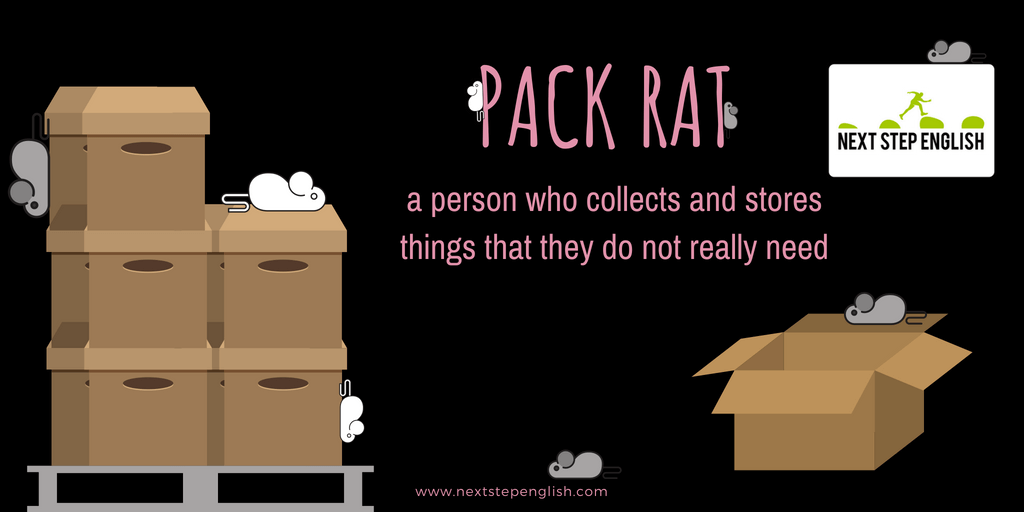 Thank you for reading through this post of mouse and rat idioms with meanings and examples! To thank you for sticking with it all the way through, here’s a bonus infographic summarizing all 9 of these great idioms for you.

You’ve read through all of these idioms. You understand them. But how well do you remember them?

Take this idioms quiz to find out!

Related: Quiz yourself on 9 father idioms!