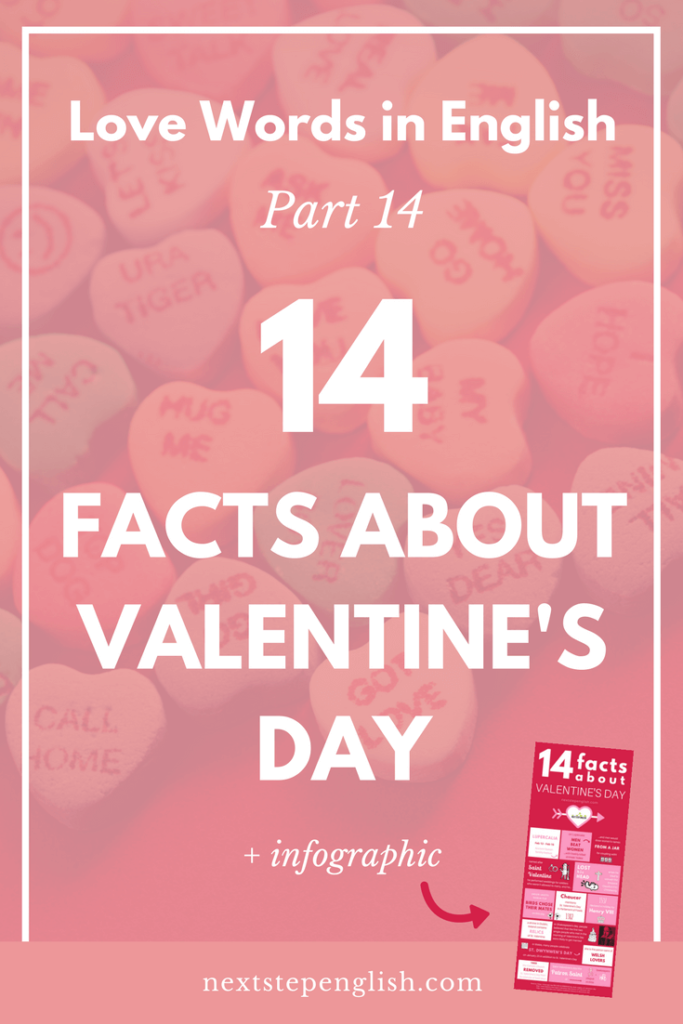 Here it is, the final post of the 14-day challenge to make you a master of English love vocabulary. No series on love would be complete without at least mentioning Valentine’s Day. So, how much do you actually know about Valentine’s Day? Before researching this post for you, I was certainly no expert. Valentine’s Day has a fascinating history, and in this post, I’ve chosen 14 of my favorite Valentine’s Day facts for you. I hope you enjoy these as much as I do!

According to NPR, men sacrificed goats and dogs on Lupercalia and then beat women with the freshly killed animals’ hides! Believe it or not, women were actually eager to be beaten like this during Lupercalia because they thought it would make them fertile. Ah, the things we do for children!

Valentine’s Day Fact 3: …and there was coupling by lottery!

The Lupercalia craziness didn’t end there. There was a random lottery where men drew women’s names from a jar to determine who would be their sexual partner for the duration of the festival! Good grief!

Valentine’s Day Fact 4: The holiday is named after Saint Valentine

These were turbulent times for the Roman Empire, and Claudius had banned young people from getting married because he thought that unmarried men made more willing soldiers. Valentine went against the emperor’s orders and performed secret marriages for these young lovers. When his crime was discovered, he was thrown into prison.

You can read more about Saint Valentine here, thanks to History.com.

His story didn’t end with imprisonment, though. The accounts are muddled—some people say he was sentenced to death for performing these secret marriages, and some people say it was for attempting to convert the emperor to Christianity—but either way, we know that Valentine lost his head.

Valentine’s Day Fact 6: It’s a day of love for the birds, too!

Regardless of the specifics in terms of the history, Valentine’s Day is a day of love. And not just for humans!

In medieval times, people believed that birds came out to choose their mates on February 14! I intend to go birdwatching this Valentine’s Day to see if I can gather any evidence for this belief. 😍

We know about this belief because it was mentioned in literature. The earliest surviving reference to Valentine’s Day, in fact, was in Chaucer’s The Parliament of Fowls, which touches on this belief.

“…For this was on seynt Valentynes day,
Whan every foul cometh ther to chese his make.”
– original version in Middle English

“…For this was on Saint Valentine’s Day,
When every bird comes out to choose his mate.”
– translation into Modern English

Chaucer published The Parliament of Fowls around 1382.

Valentine’s Day Fact 8: Henry VIII made it a holiday

For a man who went through 6 wives—and beheaded two of them—Henry VIII may not be the first person you think of when it comes to love. But it was Henry VIII who declared Saint Valentine’s Day a holiday in 1537.

Incidentally, February 14, 1537 was during his marriage to his third wife, Jane Seymour. Unlike some of his other marriages, Henry seemed to have been genuinely in love with Jane Seymour. He didn’t divorce her, annul his marriage to her, or have her executed, after all! 😉 When she died in childbirth, he was genuinely heartbroken, and despite marrying three women after Jane, Henry was buried next to Jane when he died.

I don’t have any evidence for this, but I love imagining that he made Valentine’s Day a holiday because he was in a period of blissful love with his new wife, whom he had married less than a year before.

Elizabethan England, when Shakespeare was writing, had some charming superstitions about Valentine’s Day. People believed that the first two single people who met in the morning of Saint Valentine’s Day were likely to get married.

Valentine’s Day Fact 10: A shrine in Ireland has relics of Saint Valentine

In 1836, the remains of Saint Valentine were transferred from Rome to Dublin, Ireland, along with “a small vessel tinged with his blood.” They were a gift from Pope Gregory XVI.

The remains are on display at the Whitefriar Street Church in Dublin and serve as a magnet for pilgrims.

Read more about the remains of Saint Valentine here.

Valentine’s Day Fact 11: Wales has another day of love

Saint Valentine is the most famous saint associated with love, but he’s certainly not the only one. In Wales, many people celebrate January 25, as well, in honor of Saint Dwynwen.

Saint Dwynwen was a Welsh princess-turned-nun and the protagonist in a beautiful but tragic love story. (Seriously, I recommend you read it!) She is now the patron saint of Welsh lovers.

Valentine’s Day Fact 13: The Catholic Church removed the feast day from its calendars

Did you know that the Catholic Church removed the Saint Valentine feast day from its official calendars in 1969?

And did you know that Saint Valentine isn’t just the patron saint of people in love? He’s also looking out for epileptics, plague victims, and beekeepers! I guess that’s another good reason to call your sweetheart “honey”! 🍯🐝❤️

You’ve been studying hard, and you’re finally to the end of this 14-day challenge to make you a master of love vocabulary in English.

I hope you enjoyed this challenge as much as I enjoyed making it for you. If you need a refresher on any of the lessons, just click in the table of contents below. I challenge you to memorize them all before Valentine’s Day!

Part 14: Fourteen Facts about Valentine’s Day (no vocab, culture only)

CONGRATULATIONS AGAIN, STEPPER! YOU MADE IT THROUGH THE ENTIRE SERIES!

IT’S BEEN A BUSY 14 DAYS, BUT IN THAT TIME YOU’VE LEARNED 65 ADVANCED ENGLISH WORDS ASSOCIATED WITH LOVE AND STUDIED 2 CULTURE LESSONS!

IF YOU ENJOYED THIS 14-DAY LOVE VOCABULARY CHALLENGE, WOULD YOU PLEASE SHARE IT WITH YOUR FRIENDS? THE MORE PEOPLE WHO KNOW THESE WONDERFUL ENGLISH WORDS, THE MORE PEOPLE YOU CAN PRACTICE THEM WITH. 💝👍😊👍💖 (PLUS, IT REALLY HELPS ME WHEN YOU SHARE…SO, IF YOU DO, THANK YOU!)