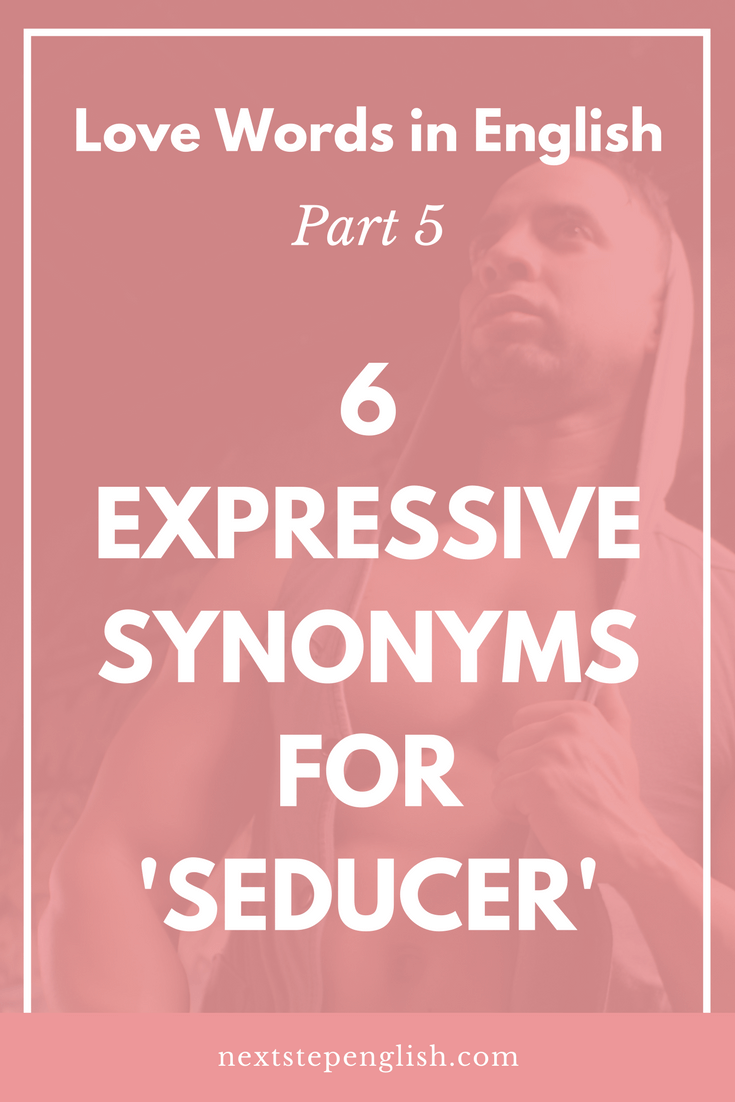 Russell Brand claims to have slept with over a thousand women, Jack Nicholson’s number is double that, and Charlie Sheen famously has around 5,000 notches on his bedpost! And these guys don’t have anything on Fidel Castro, who is said to have slept with around 35,000 women during his lifetime! So, what do you call these men, these famous seducers? In Part 5 of this series on love words in English, you’re going to learn six seducer synonyms to describe men who have had sex with a lot of women.

BONUS VOCAB: a notch on your bedpost

a notch on your bedpost = a casual sexual encounter, especially a one-night stand, counted as a tally in the overall number of people you have slept with In 18th-century Venice, one man became so famous for his sexual exploits that his name became one of the most widely used synonyms for seducer! Giacomo Girolamo Casanova was a writer, an adventurer, and a lover extraordinaire.

In English, we use the word Casanova to refer to a man who has sex with a lot of women. We especially use this word when the man is charming or fascinating in some way. Unlike some of the other words on this list, when we call someone a Casanova, we’re often saying it with a hint of admiration.

Women can’t resist my brother. He’s been a Casanova since he was 12!

Lothario is another seducer synonym that comes from someone’s name. Unlike Casanova, Lothario didn’t exist in real life. Rather, he was a character in a play called The Fair Penitent written by Nicholas Rowe in 1703. In the play, Lothario is exceedingly handsome and charming, but he’s definitely not a good person.

A Lothario is a man who has sex with a lot of women. In fact, you might say that seducing women is his favorite hobby!

Everyone knows Greg is the office Lothario, but he’ll never get fired because his sales numbers are through the roof.

Womanizer is the most common of these seducer synonyms, and it refers to a man who has sexual relationships with many different women. Womanizers usually think of women like objects and simply use them for their own pleasure. (Hmph!)

Whereas Casanova might be said with a hint of admiration, we always use womanizer in a disapproving way.

You cold-blooded cad! You lecherous lout! You worm of a womanizer! Get out of my apartment, and never call me again!

cad = a man who behaves in a dishonest or unfair way

lecherous = having too much interest in sexual pleasure

A libertine is a man who acts without a sense of responsibility in sexual matters. This word is more formal than the other words on this list, and it also comes with a disapproving tone.

Did you notice that libertine looks similar to liberty? That’s because they share the same root! They both come from the Latin word libertus, which was a word for a freed slave in Ancient Rome. By the late 16th century, libertine had become a word that meant freethinker (= someone who has their own ideas instead of accepting the ideas of other people). Shortly thereafter, it started to take on its modern sense. Cool, right?!

Vegas is a mecca for gamblers and libertines.

You may think of a rake as a type of garden tool used for gathering leaves.

That’s certainly one definition, but a rake is also a slightly old-fashioned word for a rich and fashionable man who is thought to have low moral standards, for example because he has sex with a lot of women. Because it is slightly old-fashioned, when we use this word nowadays, we often use it in a playful or humorous way.

He may be a rake and a rascal, but I can’t help myself. I love him.

All of the other seducer synonyms in this post can apply to men of any age, but a roué is specifically an older man. A roué is a debauched older man.

debauched = a debauched person indulges heavily in sensual pleasures such as sex, alcohol, drugs, etc., to the point it is considered morally harmful

Roué is a word with a fascinating history, too! (If you like learning about English word origins, I recommend searching in Merriam-Webster. They provide some of the most detailed etymologies I’ve seen!)

Like rake, this word is a bit old-fashioned, so we often use it today for humorous effect. In modern slang, it would be common to refer to someone as a dirty old man, but if I wanted to liven up my language, I might put a smile in my eye and call him a roué instead.

Did you notice that old roué in the corner? He’s been eyeballing every waitress here, or at least all the ones under 20.

What about the ladies?

These words all refer to men. Are there similar words that describe female seductresses in English?

Of course! And you’re going to learn all about them in Part 6 tomorrow!

Part 14: Fascinating Facts about Valentine’s Day (no vocab, culture only)