Word of the Day | 2 comments 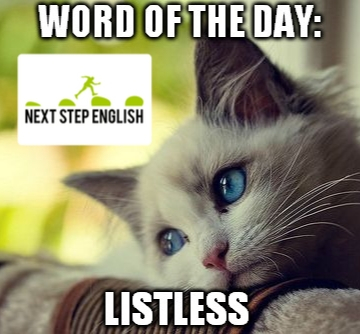 having no energy or enthusiasm

😟: He’s been listless since you left. He barely eats, and he won’t play with his toys. He really misses you guys!

😕: Is it okay if we skip the gym today? I’m feeling a bit listless.

😉: That’s when you need the gym the most! Come on, mister! Let’s get you moving!

Examples of ‘Listless’ from the News

“Murch said Cathy was inconsistent with her treatment and she complained medication often made her feel dull or listless.”
– Anne Allred, “His wife killed his children and herself, now he fights stigma of mental illness”, 23 September 2019

“Mr Kolo’s eyes are dark and bloody red, he slurs slightly as he talks. Mr Mohamed is listless and distracted. His head is hanging between his bony shoulders.”
– BBC News, “Nigeria’s Tramadol crisis: The drug fuelling death, despair and Boko Haram”, 1 June 2018