Did you know that an Irish-American astronaut actually played Irish music on an antique flute in the International Space Station on St. Patrick’s Day in 2011? (You can listen to the track here!) Or that the Canadian province of Newfoundland and Labrador recognizes St. Patrick’s Day as a public holiday, giving government employees the day off from work? Continue reading to learn some interesting St. Patrick’s Day trivia to amaze your friends next March 17! At the end, try my St. Patrick’s Day quiz to see how much trivia you remember!

If you really want to get into the St. Patrick’s Day mood, listen to The Clancy Brothers in the background while you read! Here’s one of my favorite Irish songs, to get you started!

Related: 5 romantic jazz songs for your Valentine’s Day playlist (or any other romantic day) ❤️

St. Patrick’s Day Trivia 1: Which animal did St. Patrick banish from Ireland, according to legend? 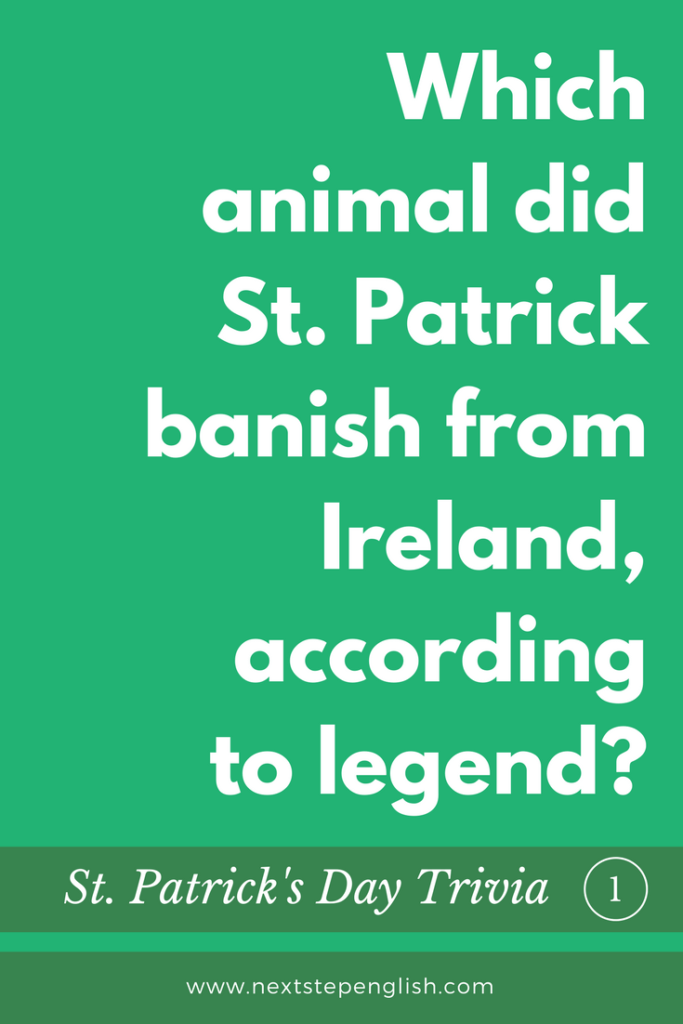 According to legend, St. Patrick is responsible for there being no snakes in Ireland!

What does BANISH mean?

banish someone (from somewhere) = to order someone to leave a place, especially a country, as a punishment. We also use this figuratively to refer to making someone go away and never come back. 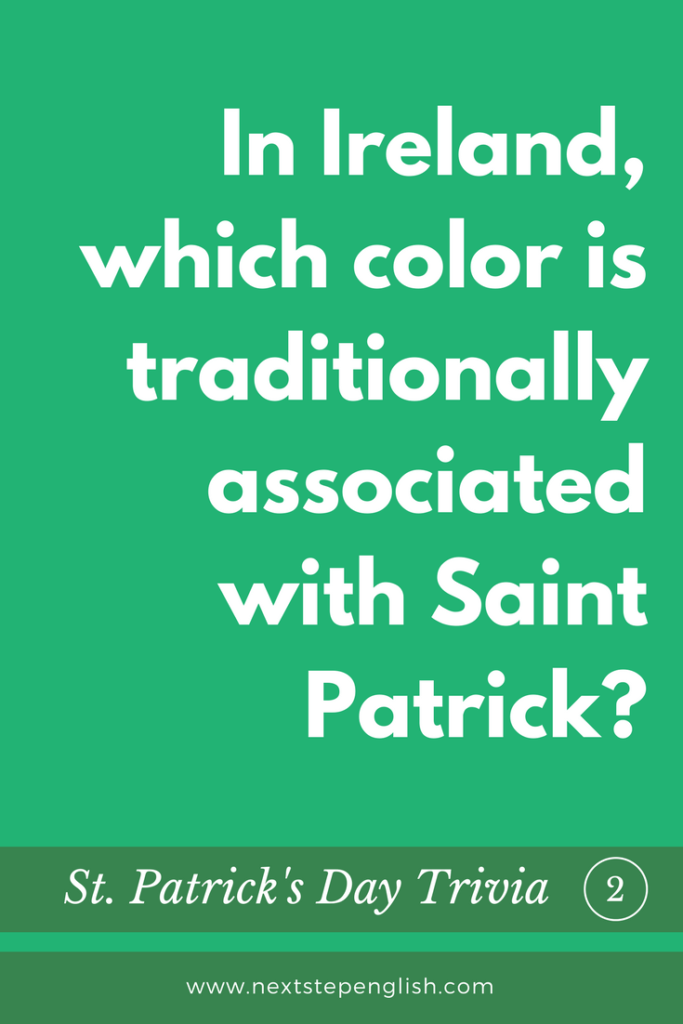 Are you thinking green? Think again!

The color traditionally associated with St. Patrick is…blue! Sky blue, as it turns out, and in Ireland, there is a specific shade of sky blue called St. Patrick’s blue. 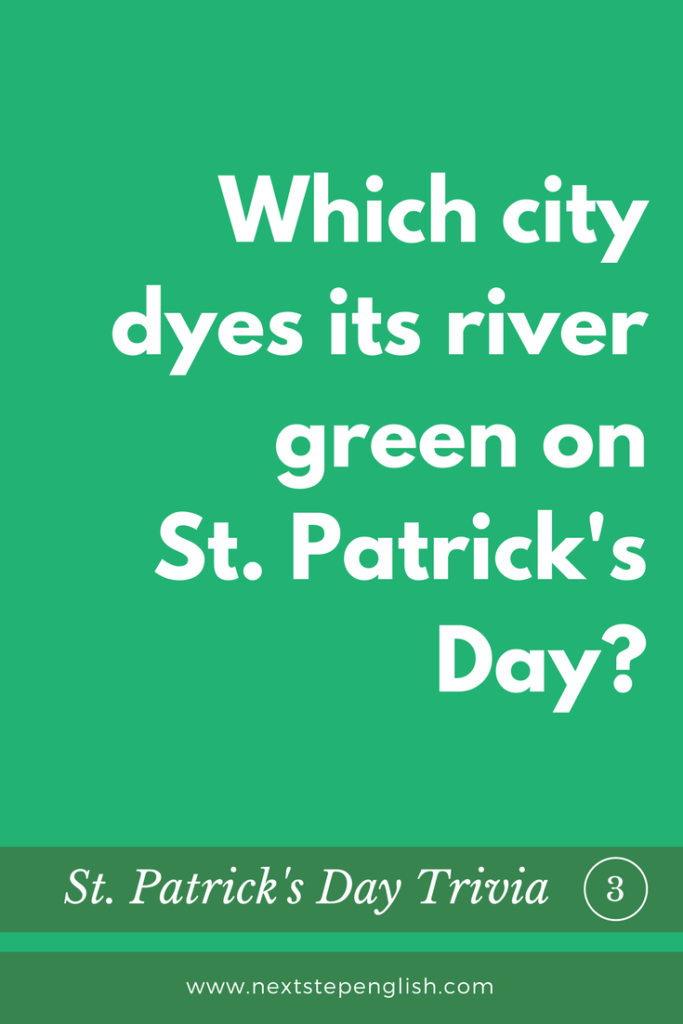 Every St. Patrick’s Day, the city of Chicago dyes its river green!

During their time in power, the Obamas also dyed the water in the fountain in front of the White House green in homage to this Chicago tradition. However, until the 1960s, pubs in Ireland observed the holiday by actually closing for the day! (St. Patrick’s Day is a religious holiday, after all!)

What is a PUB?

pub = a building where people go to drink and meet their friends. Pubs serve alcoholic and other drinks, and often also food. 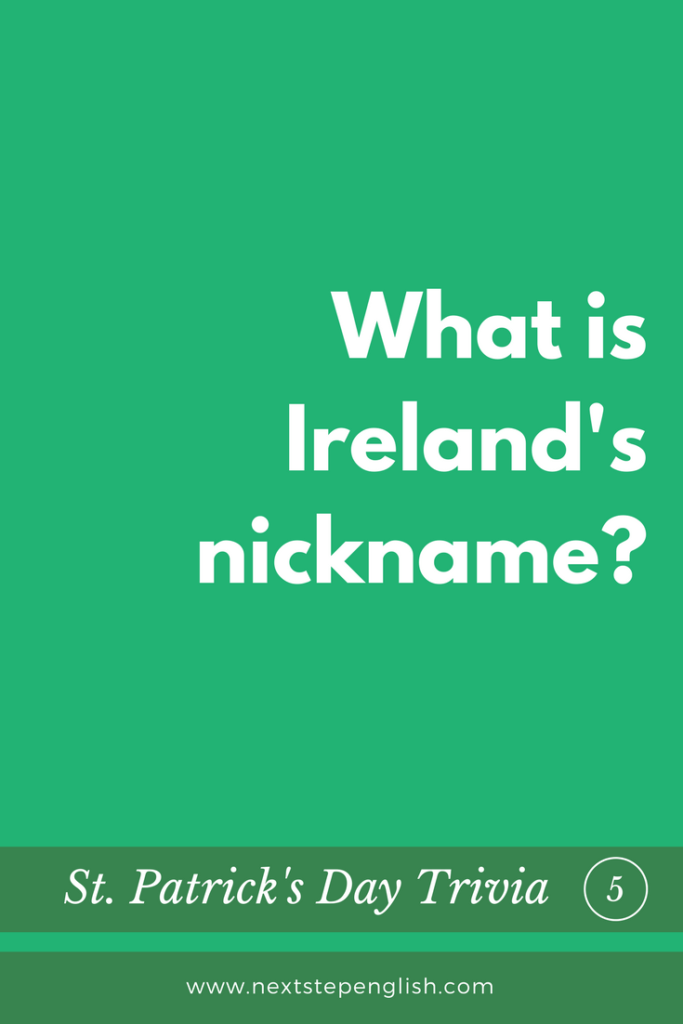 Ireland’s nickname is The Emerald Isle.

And no, this isn’t because they have emerald mines. It’s because of the rich, green color of the Irish countryside. Beautiful, isn’t it? You may think that because St. Patrick is the patron saint of Ireland that the first St. Patrick’s Day parade was in Ireland. I certainly assumed that.

Nope! The very first St. Patrick’s Day parades were in the United States in the 1700s. NPR tells us that George Washington even gave his Irish soldiers the day off so they could celebrate. St. Patrick’s Day Trivia 8: What do the colors in Ireland’s flag represent?

There are three colors in Ireland’s flag—green, white, and orange—but what do they represent?

In simplified terms, the green represents the Catholics in Ireland. Orange represents the Irish Protestants. And white symbolizes unity between the two. 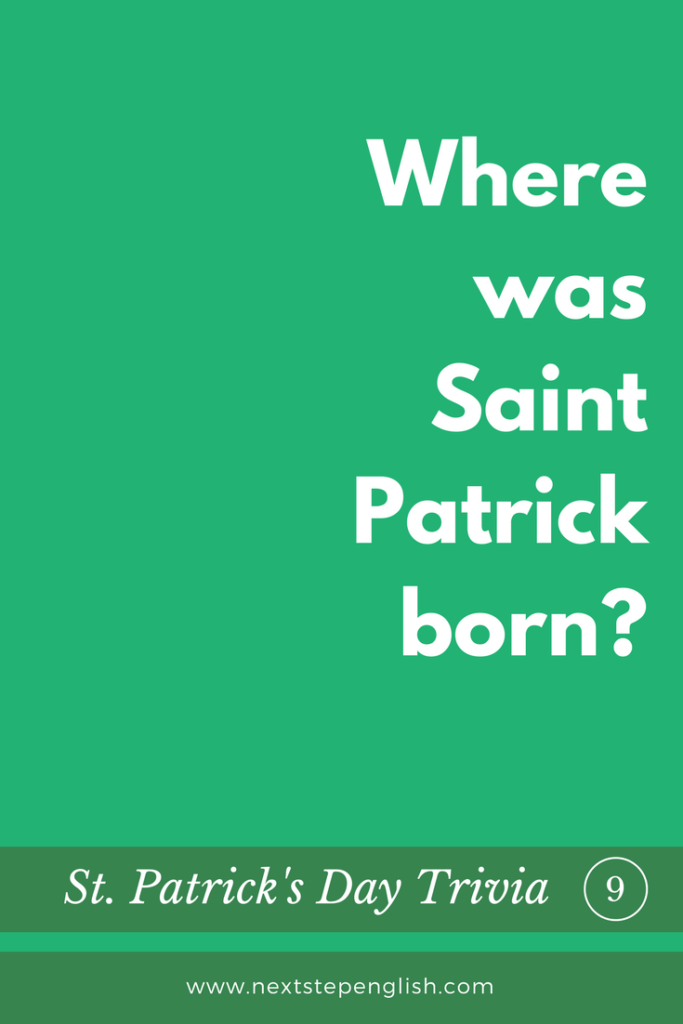 St. Patrick is universally associated with Ireland, but did you know that he wasn’t born in Ireland?

Saint Patrick was born in Scotland, as a matter of fact! He first went to Ireland as a teenager when he was kidnapped and sold into slavery by pirates! He was able to escape and return to Scotland a few years later. It was only as an adult that he returned to Ireland as a missionary, and he spent the last 40 years of his life in The Emerald Isle.

Although scholars don’t all agree on his birth name, the most popular belief is that he was named Maewyn Succat.

Thank you for reading this post of St. Patrick’s Day trivia!

To help cement the trivia in your mind, try out this quick quiz! Or use the questions to test your friends and see how they do!