You’re enjoying a conversation in English—heck, you’re even proud of how good your listening comprehension is!—and then someone mentions a number. It might be a price, or a statistic, or the number of calories in their burrito. As the conversation moves forward, you’re caught trying to picture that number in your head. By the time you’ve processed the number, the conversation has moved on without you, and you get flustered trying to catch up. Numbers present a big listening challenge in English. So, a little extra practice listening to numbers would be a good thing, right?

This post comes in two parts. First, I give you a few listening tips related to numbers in English. The second part takes the form of an advanced English listening quiz, where you’ll listen to 10 different sentences at full, conversational speed. Transcripts come along with the audios, and only the numbers are missing. Write down the numbers you hear on your own sheet of paper, then check each answer! Ready? It’s time for some killer English numbers listening practice! 👊😎

10 questions not enough for you? Check out Parts 2 and 3! But first, some tips for listening to numbers in English

Of all the listening skills you need to acquire, listening to numbers in English is one of the hardest. Even some of my most advanced students have a hard time with numbers, and I certainly struggle with them in Spanish. Before you start the numbers listening quiz, here are a few things to keep in mind.

Related: Why You Should Learn English with Music 🎶🎵

i. Fifteen or fifty? Eighty or eighteen?

This is a really tough point for English learners because, as far as the sounds are concerned, the difference between -ty and -teen is pretty subtle. But there’s good news.

There’s more to pronunciation than the phonetic sounds. There’s also syllable stress! And that’s going to help you with these tricky numbers.

When you keep that in mind, it’s a lot easier to tell the difference when you’re listening to these numbers in English!

Related: Pronouncing sch- words is tricky in English. Learn how in this video post!

ii. A few quirks of speaking about decimals. (And phone numbers.)

Sometimes, you might understand all the numbers someone says, but you get tripped up with another word connected with the numbers.

I want you to notice something else here, too. When we’re listing the numbers after the decimal point, we most often say each number individually. So, 1.64 would most commonly be “one point six four“, not usually “one point sixty-four“. Forewarned is forearmed, so knowing that will make it easier to process those numbers mentally when you hear them.

You know where else we do that? In phone numbers! It’s a matter of preference, so there will be some people who are exceptions, but when giving phone numbers in the US, most people say each number individually. So, (555) 293-6816 would be spoken by most people as “five five five [pause] two nine three [pause] six eight one six“, not usually “five fifty-five [pause] two ninety-three [pause] sixty-eight sixteen“. Even as a native speaker, I find it difficult when someone quickly tells me their phone number in this second way. That’s because I almost never hear it.

iii. All decimals except prices, that is…

What would languages be without exceptions? (Less maddening, that’s what! 😩)

Well, the one exception to what I just told you about how we say decimals in spoken English is this: when it comes to prices, we never say “point”, and we always say the two numbers after the decimal point as one number, never each digit individually.

It’s also acceptable to say “forty-nine dollars and ninety-nine cents“, but it’s less common. We like to be quick when we’re speaking.

iv. What about the number 0?

In situations where you say each number individually, like with decimals and phone numbers, it’s useful to know how to pronounce the number 0. We say the number 0 in two different ways in English, and they’re both equally common in conversation: zero or O (as in the letter). So, 1.04 could be “one point zero four” or “one point O four“. The phone number (555) 302-7701 could be “five five five [pause] three zero two [pause] seven seven zero one” or “five five five [pause] three O two [pause] seven seven O one“.

v. How native speakers says numbers in the hundreds.

In spoken English, a number like 915 could be pronounced “nine hundred fifteen,” but we often say “nine hundred and fifteen“. We say that extra ‘and’ quickly, but don’t fall into the trap of thinking it’s an extra digit. “Three hundred and two” is 302. “Five hundred and eighty-five” is 585.

And when it comes to the number 100, we can either say “one hundred” or “a hundred“. So, there are four potential ways you might hear a native speaker say the number 109:

In terms of speaking, don’t worry too much about all these possibilities. Pick one style you like, and stick with it. But in terms of listening, it’s helpful to be prepared to hear all these different variations.

vi. In conversation, you almost never need to understand the exact number someone says.

You heard me right. These tips will help you, but by far the most important thing to remember when it comes to listening to numbers in English is that in normal, daily conversation, you should not stress out about the exact number someone says. All you need to understand is the ballpark figure.

What is a BALLPARK FIGURE? 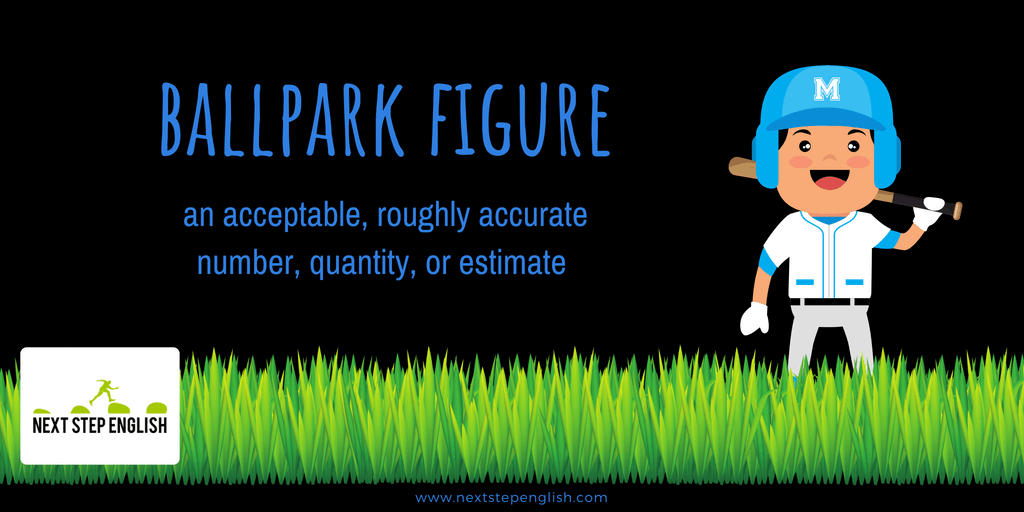 If someone says that an event took place 47 years ago, don’t get hung up on the exact number. Focus on the number being over 40 and under 50. So, while the speaker is saying seven, you’re giving your brain a chance to catch up to the idea of forty. That’s good enough for you to react appropriately. Who cares if it was 47 years ago, or 41 years ago, or 49 years ago? It’s long enough ago for you to say, “Wow! That really was a long time ago!” That response would be appropriate for any number in the forties.

If you, like me, are the type of person who likes to pay attention to details, I’m telling you, get over it. You will get bogged down and risk losing the thread of the conversation as you mentally process the precise number. It’s not going to help you. Train yourself to focus on the ballpark figure instead of getting slowed down by the details. That’s almost always good enough.

Related: Ballpark figures are often good enough for numbers, but spelling is another story! Test your English with these 13 hilarious spelling fails! 📝😄

You don’t need me to tell you this. The more you practice, the easier it will get. Eventually, you won’t have to pause your thinking to process the number. You won’t have to settle for a ballpark figure so you can keep up with the conversation. Eventually, listening to numbers will come as naturally to you in English as it does in your native language.

I’m here to help you get some of that vital practice.

The second part of this post is a 10-question listening quiz focusing on numbers in English. I’m speaking quickly, so this is not easy, but I did that on purpose. People aren’t going to slow down for you in real life. Over the next two days, I’ll be releasing an additional 20 questions to help you practice listening to numbers in English! Fun stuff!

We manufacture 58 varieties of candles and 21 types of soap.

The oldest known pyramid in Egypt was built 4,648 years ago.

I love Sausage McGriddles, but each one has 421 calories, 24 grams of fat, 32 milligrams of cholesterol, and 42 grams of carbs.