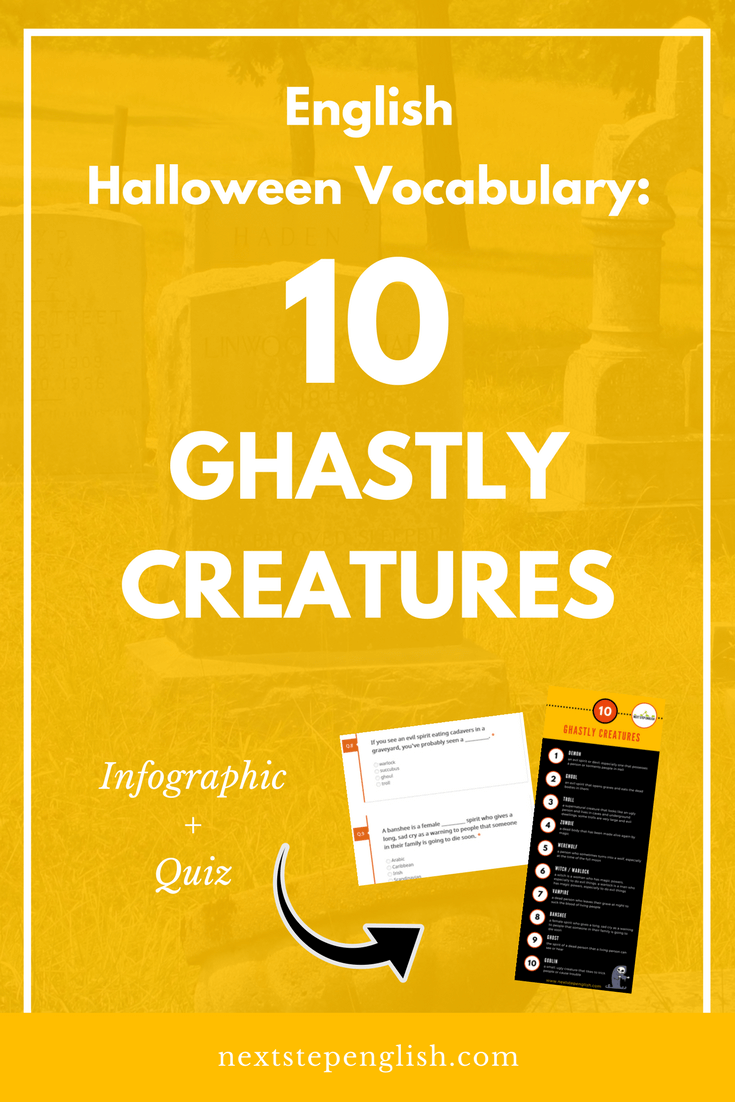 It’s that time of year again: Halloween! Witches and ghosts and goblins haunt our thoughts, and carved pumpkins cackle from every porch. I’m here to help you expand your Halloween vocabulary. Specifically, we’re going to look at 10 ghastly creatures to frighten you this Halloween! Do you know the difference between a troll and a banshee, a goblin and a ghoul? Scroll down to find out, and then include these in your Halloween stories to terrify your friends!

A demon is an evil spirit or devil, especially one that possesses people or torments people in Hell.

If you are possessed by a demon, you will need an exorcism, which is a ceremony where a demon is cast out of a place or a person’s body by prayers or magic.

Ghouls are evil spirits that open graves and eat the dead bodies in them.

Ghouls came into the English language in the 18th century from Arabic mythology. In Arabic mythology, ghouls live in the desert, but in English, ghouls can live anywhere.

A troll is a supernatural creature that looks like an ugly person and lives in caves and underground dwellings. Some trolls are very large and evil, and others are small and friendly but like to trick people.

English adopted the idea of trolls from Scandinavian folklore, and we see them now in popular English novels like The Hobbit and Harry Potter.

Zombies are dead bodies that have been made alive again by magic. Zombies originated in certain African and Caribbean religions, but now they’re common in all types of horror stories in English.

We even have a slang term, the zombie apocalypse, which refers to a scenario where zombies take over the earth and destroy human civilization. Sometimes, this term is used jokingly.

Here’s an example of using the zombie apocalypse in a humorous way:

Paula: Wow! You’ve got enough fruit snacks to feed an army!
Violeta: Of course! We’ve got to be ready for the zombie apocalypse!

Related: The Origins of English Words, Like Lobster and Zombie (with Infographic)

Werewolves are people who sometimes turn into wolves, especially at the time of the full moon.

A witch is a woman who has magic powers, especially to do evil things. Witches are often shown riding brooms and wearing black, pointy hats.

A warlock is a man who has magic powers, especially to do evil things.

A vampire is a dead person who leaves their grave at night to suck the blood of living people. Dracula is one of the most famous vampires in literature.

A banshee is a female Irish spirit who gives a long, sad cry as a warning to people that someone in their family is going to die soon. Unlike ghouls and zombies and trolls, which have become so common that we no longer associate them with their original cultures, the banshee is still very much thought of as an Irish spirit.

Banshees are mentioned in Irish folk songs, like “The Rising of the Moon,” and I’ll never forget being terrified by the banshee in the old Disney movie Darby O’Gill and the Little People when I was a girl.

A ghost is the spirit of a dead person that a living person can see or hear.

Goblins are small, ugly creatures that like to trick people or cause trouble. Goblins are also often greedy, particularly for gold and jewelry.

Test Yourself on These 10 Ghastly Creatures!