Understanding Humor in English: Mrs. Slocombe’s Pussy and the Art of the Double Entendre

Some English language skills are easy to acquire, some are difficult, and some are downright fiendish. In the fiendish category is understanding humor in English. You may know more idioms than you can shake a stick at, and you may be a phrasal verb maven, but understanding English humor is another animal altogether. Understanding humor in a foreign language requires advanced vocabulary, including sometimes needing to know the various nuances of a specific word, and it also sometimes requires cultural knowledge. These things make humor one of the most difficult skills to acquire when you are learning English as a second language, but it can also be one of the most enjoyable! 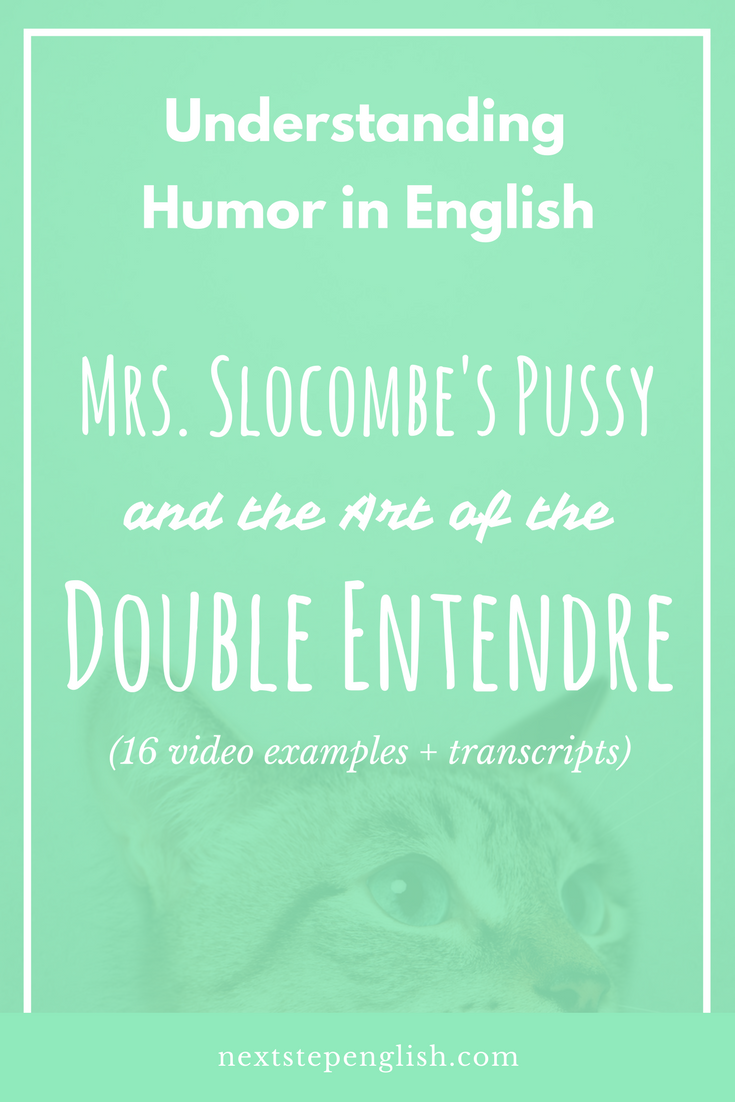 First, we’re going to look at what a double entendre is, and then we’re going to look at 16 examples of the double entendre with Mrs. Slocombe’s pussy so you can internalize this type of humor and start to recognize it elsewhere. The different accents can be difficult to understand, so I’ve provided a written transcript below each video to help you out.

What is a Double Entendre?

A double entendre is a word or phrase that can be understood in two different ways when used in context, one of which usually refers to sex.

The double entendre is a type of wordplay, and it has been a popular device in English-language humor for hundreds and hundreds of years. Chaucer and Shakespeare both used it in their works, and no James Bond film would be complete without a bit of double entendre!

Related: How many words did Shakespeare coin in English? Find out here!

Have you spotted any examples of the double entendre in English-language films or TV shows recently? Share them with us in the comments so we can all have a good laugh!

Why is Mrs. Slocombe’s Pussy a Double Entendre?

The word pussy has two meanings in English:

= a vulgar and offensive slang term for a woman’s genitalia

Mrs. Slocombe is a character from the British sitcom Are You Being Served?, which also aired on American public television for many years. I used to watch it as a child after coming home from school. When she talks about her pussy, she is intending to talk about her pet cat. However, the sexual meaning would also make sense in the sentences she uses. The creators of the show play with this ambiguity for humorous effect.

Double Entendre 2: It wins a prize every time I show it!

Mrs. Slocombe: [speaking to a truck driver on the CB radio] On the mantelpiece in my parlor, I’ve got a whole row of silver cups.
Truck Driver: Oh? And what are they for?
Mrs. Slocombe: They’re for my pussy. Do you know, it wins a prize every time I show it!
Truck Driver: [screeching sound of truck crashing]

Double Entendre 3: I had to thaw my pussy out before I came.

Captain Peacock: One minute late.
Mrs. Slocombe: You’re lucky to have me at all, Captain Peacock! I had to thaw my pussy out before I came.

Related: 12 Animal Similes to Use Instead of “Very” When You Speak English

Double Entendre 4: If you can see my pussy, would you drop a sardine on the mat?

Mrs. Slocombe: [speaking on the phone] Oh, hello? Hello, is that Mr. Akbar? Mrs. Slocombe here, your next-door neighbor. I wonder, would you do me a favor? Would you go to my front door, bend down, and look through the letter box? And if you can see my pussy, would you drop a sardine on the mat?

Double Entendre 5: That played havoc with my pussy!

Mrs. Slocombe: Having a bath at six o’clock in the morning played havoc with my pussy!

Double Entendre 6: I shall be stroking it for the rest of the evening.

Mrs. Slocombe: I’ve got to get home. If my pussy isn’t attended to by eight o’clock, I shall be stroking it for the rest of the evening to calm it down.

Double Entendre 7: My pussy’s been locked up for eight hours!

Mrs. Slocombe: Oh, Mr. Rumbold, I hope this isn’t going to take long. My pussy’s been locked up for eight hours, and I’m afraid it’s just not convenient!

Double Entendre 8: He had to risk his life on a narrow ledge trying to grab hold of my pussy.

Mrs. Slocombe: I hope this isn’t going to take long, Captain Peacock. The last time I was late, a fireman had to climb out of my bedroom window and risk his life on a narrow ledge trying to grab hold of my pussy.
Mr. Lucas: They’re very brave, these firemen.

Double Entendre 10: Have it clipped and then shampooed!

Mr. Humphries: Well, you could open a pet shop.
Mr. Lucas: Yeah, you could have a flashing light outside saying, “If your pussy’s in the mood, have it clipped and then shampooed!”

Double Entendre 11: I’m not having them handling my pussy!

Mrs. Slocombe: Well, you know how clumsy those removal men are. I’m not having them handling my pussy!

Double Entendre 12: My pussy gobbles them up in a flash!

Mrs. Slocombe: Well, I just do simple cooking to my own taste, but you’ll never see a dirty plate in my kitchen. And if there are any leftovers, my pussy gobbles them up in a flash!

Related: My family gobbles up apples like it’s going out of style. Learn 5 idioms and proverbs about apples!

Double Entendre 13: I had to light the oven and hold my pussy in front of it.

Mrs. Slocombe: Well, the central heating broke down. I had to light the oven and hold my pussy in front of it.

Double Entendre 14: The mere sight of my pussy drives him mad!

Mrs. Slocombe: And I hope we’re not going to be late tonight because I’ve left Winston clinging to the curtain rail. He refuses to come down! The mere sight of my pussy drives him mad!
Mr. Lucas: Is Winston the lodger?
Mrs. Slocombe: No, no, no, no! He’s my canary!

Double Entendre 15: This sort of thing just isn’t fair on my pussy.

Mrs. Slocombe: You know, this sort of thing just isn’t fair on my pussy. She has a go at the furniture if I’m not there prompt.

Double Entendre 16: The least sign of danger, and my pussy’s hair stands on end.

Mrs. Slocombe: You know, animals are very psychic. I mean, the least sign of danger, and my pussy’s hair stands on end like a golliwog.
Mr. Lucas: Really? Better than a burglar alarm, isn’t it?