This That These Those: The Ultimate Guide to Demonstratives in English

This That These Those. They’re called demonstratives, and they’re some of the most common words in the English language. Do you know how to use them?

In this post, we’ll cover how to use demonstrative pronouns and demonstrative adjectives. Then, we’ll go beyond the basics to talk about some common figurative uses of this, that, these, and those and three conversational idioms using demonstratives. 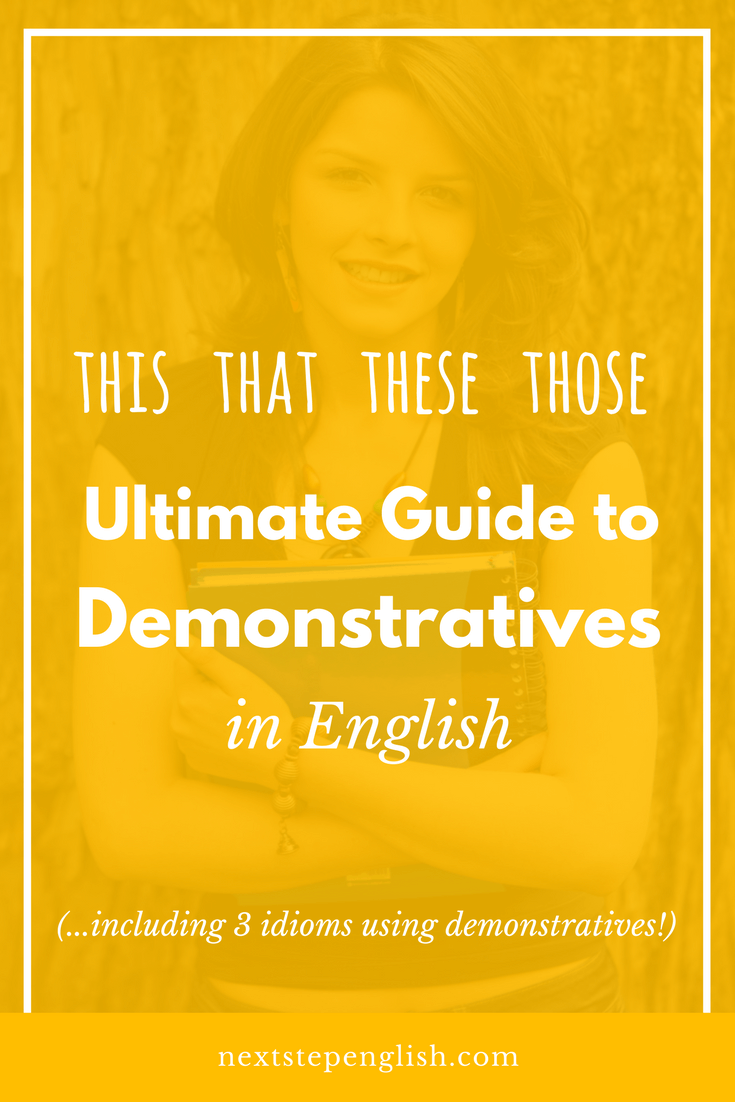 1. This That These Those: The Basics

In English, we use demonstratives to give information about if something is close to us or far from us.

Demonstratives can be used as either pronouns or adjectives, but they always keep the same basic meaning of conveying distance from the speaker. 2. Demonstrative Pronouns: This That These Those

*** TIP: To use a demonstrative pronoun, make sure that the item it replaces is obvious from context. ***

The box in my arms is heavy.

The box over by the door is ready to be moved.

That is ready to be moved.

The boxes next to me aren't labeled yet.

These aren’t labeled yet.

The boxes over there are too small.

Those are too small.

Do you want the box in my arms?

Do you want this?

Let's move the box over by the door.

They will label the boxes next to me.

They will label these.

We don't need the boxes over there.

We don’t need those.

We can also use demonstrative pronouns as one-word answers to questions, like this:

Danny: Which towels should we bring?
Agatha: These.

Here, Agatha wants to bring the towels that are close to her.

Bethany: Why are you scared?
Jeff: That! (pointing to a snake)

In the second example, Jeff indicates that he is scared because a snake is there. The snake isn’t terribly close to him yet, but he’s still frightened.

3. Demonstrative Adjectives: This That These Those

We use demonstrative adjectives to give further information about a noun.

Michael: Which DVD do you want to watch?
Alicia: Let’s watch that one.
Michael: Pulp Fiction? That movie is supposed to be violent. How about this one?
Alicia: Sounds good to me! I love Shrek!

Related: When to Use Adjectives in English

The demonstrative adjective must always come before the noun it describes.

Rephrase these examples to use a demonstrative adjective. After you say your answer out loud, click on the tab to see if you got it right:

The DVD in my hand is spectacular.

This DVD is spectacular.

The DVD you have is scratched.

That DVD is scratched.

The DVDs in my shop are top quality.

These DVDs are top quality.

The DVDs on the shelf over there are all romantic comedies.

Those DVDs are all romantic comedies.

In general, a demonstrative adjective answers the question “Which one?”

Barbara: I’d like to buy a bracelet, please.
Susan: Which one?
Barbara: That one.

Here are a few examples that we frequently use in conversation:

a. “That” can mean “The thing you just said” or “The situation you just referred to”

In conversation, we can use the demonstrative pronoun “that” to mean “the thing you just said” in order to avoid repetition. Here are some examples:

Leila: You never loved me enough.
Jared: That‘s not true! ( =The thing you just said is not true!)

Walter: Tomatoes grow best in June.
Sharon: That‘s a fact! (=The thing you just said is a fact!)

Similarly, “that” can also mean “the situation you just referred to.”

Meg: My ex-husband came into my store this morning.
Ann: That‘s awkward! (=The situation you just referred to is awkward!)

When we’re speaking, we can use “this” to mean “the thing I am about to say.” We do this to draw attention to or show the importance of the thing we say next. In this usage, we add extra emphasis to the word “this” when we speak.

“This” can also mean “during the [time] we are currently in.”

a. this, that, and the other

In informal English, we often use the idiom “this, that, and the other” to mean “a lot of various, unspecified things.” With this idiom, we emphasize there being a lot of things. Here are some examples:

Sandy: What do the reporters want?
Kate: They want explanations for this, that, and the other. Are you ready to talk to them, or do you need more time?

Jordan: His room is a mess! He’s got this, that, and the other all over the floor! Can you help him clean?

Nolan: You look tired. Have you been sleeping enough?
Veronica: No. I’ve had a lot on my mind.
Nolan: Like what?
Veronica: This, that, and the other.

b. this and that

“This and that” means “a few various, unspecified things.”

“This and that” is similar to “this, that, and the other,” but instead of emphasizing that there are a lot of things, it emphasizes that there are only a few things. 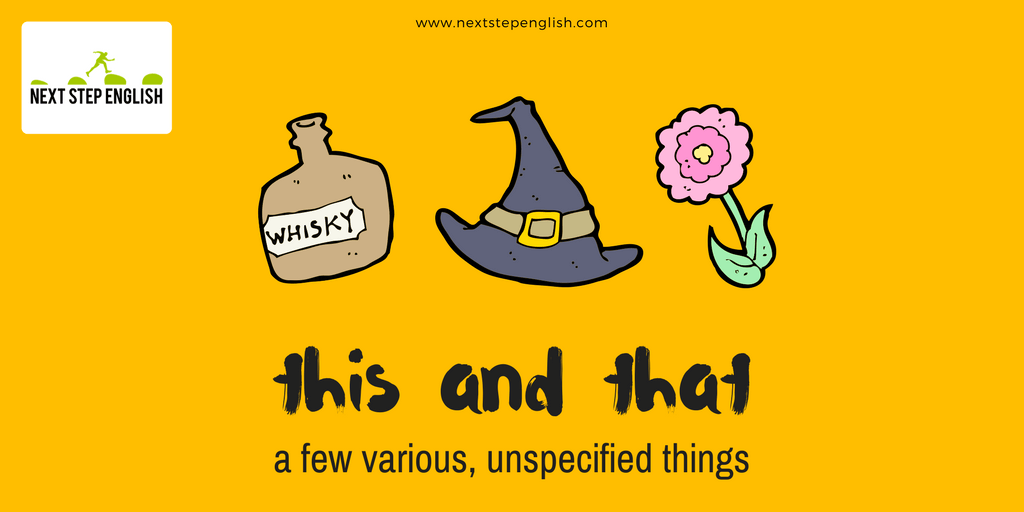 Debbie: Do you have a lot to do before we go to the beach this weekend?
Lee: No, just this and that.

Frank: Have you ever worked in construction before?
Andy: I did this and that for an electrical contractor last summer, but I didn’t get any serious training.

Summer: You can find this and that at the local shops, but if you want to do some serious shopping, you’ll need to go to the mall.

c. You can say that again!

If someone says something that I strongly agree with, I can respond with: “You can say that again!” This is an idiom to use in casual conversations, not in a formal setting.

“You can say that again!” means “I completely agree with the thing you just said!” We’re not literally asking the other person to repeat what they just said. Nell: We need to spend less and save more.
Marvin: You can say that again!

Ashleigh: Uruguay has some of the best soccer players in the world.
Monique: You can say that again!

James: You look like you need a hug.
Carol: You can say that again! I’d love a hug!