Christmas Tree History in the U.S. (with Timeline Infographic) 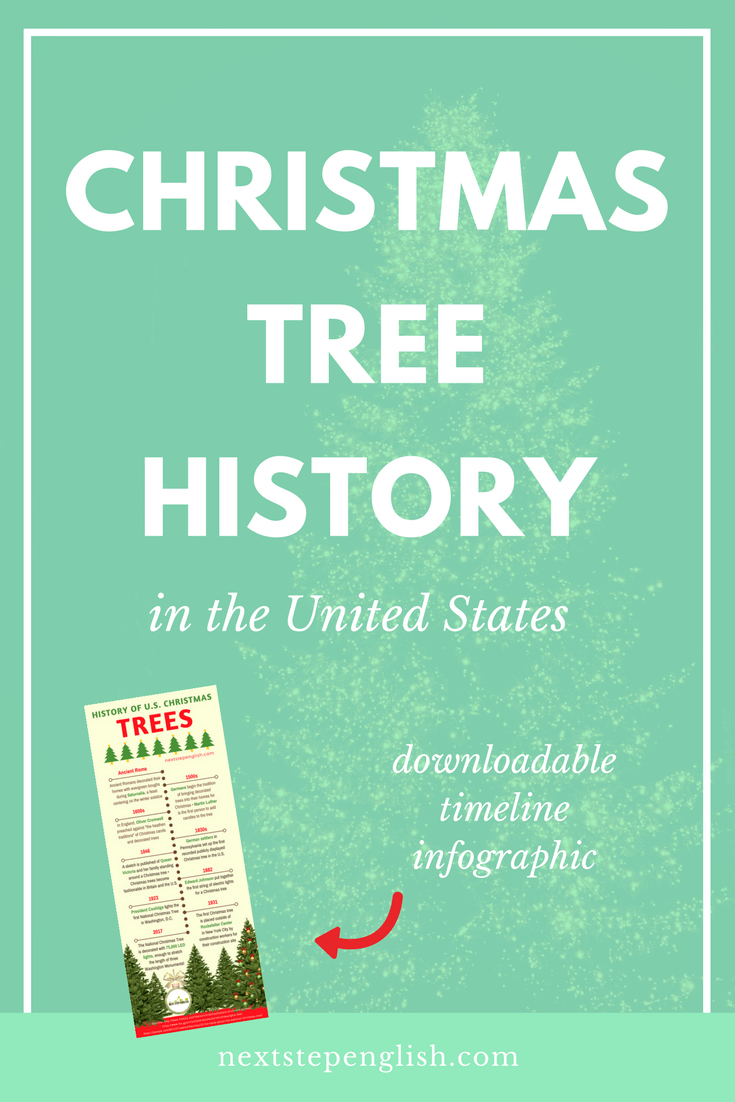 1. Ancient Rome and the Pagan Origin of the Christmas Tree

Although Christmas is an inherently Christian holiday—it celebrates the birth of Christ, after all—many Christmas traditions are rooted in earlier pagan practices. Constantine was the first Christian Roman Emperor, and he was the first person to celebrate Christmas on December 25. This is during roughly the same period as Saturnalia, a Roman festival honoring Saturn, the ancient god of agriculture. Saturnalia was held from December 17 through December 23, straddling the winter solstice, which is the shortest day of the year in the Northern Hemisphere.

Christmas trees are evergreens. They might be firs, spruces, or pines. An evergreen is a tree that keeps its leaves or needles all throughout the year, even in cold weather. During Saturnalia, Ancient Romans decorated their homes with evergreen boughs, and many other pagan cultures gave special significance to evergreens, as well.

Western Germany began the tradition of the Christmas tree around the 1500s.

The unofficial feast day of Adam and Eve was on December 24. To celebrate, people brought evergreen trees into their homes and decorated them with dried apples. The tree symbolized the tree in the Garden of Eden, and the apples were a symbol of the forbidden fruit.

Many people believe that Martin Luther, the famous Protestant reformer, was the first person to illuminate a Christmas tree. The story goes that he was out walking and preparing a sermon one night, and he found himself marveling at the stars twinkling amongst the trees in front of him. When he got home, he put up a tree and wired candles throughout its branches to recreate the scene from nature. Some people in northern Europe do still adorn their Christmas trees with real candles, and electric candles are commonplace everywhere. I suppose Martin Luther’s legacy lives on in more ways than one!

Related: Do you know any English words of Germanic origin? Check out our timeline of the English language!

In the 1600s, Oliver Cromwell railed against Christmas festivities such as singing Christmas carols and decorating Christmas trees. He called them “heathen traditions.” He and his government took significant measures to abolish Christmas celebrations altogether.

I am going to break from my normal rule of being objective and tell you my opinion: I loathe Oliver Cromwell.

German families living in the States had been decorating Christmas trees within their homes for some time. However, we don’t have a record of a publicly displayed Christmas tree in the U.S. until the 1830s, when one was put up by German settlers in Pennsylvania.

In 1846, The Illustrated London News published a sketch of Queen Victoria and her family standing around a Christmas tree.

6. Let There Be Light! Electricity Meets the Christmas Tree

Martin Luther began the tradition of illuminating the Christmas tree with candles, and in 1882, an associate of Thomas Edison named Edward Johnson created the first string of electric lights for a Christmas tree.

7. The First National Christmas Tree in the U.S.

President Calvin Coolidge began the tradition of lighting a National Christmas Tree in the United States in 1923.

8. A Tradition Begins at Rockefeller Center

Today, the Rockefeller Center Christmas trees are towering. In 1948, they brought in a tree from Connecticut that was 100 feet tall!

However, this tradition has humble origins. It began in 1931, during America’s Great Depression, when a group of construction workers set up a modest Christmas tree for their work site. It was small and didn’t have any ornaments. In some ways, I think that humble Christmas tree must have felt even more special than the colossal trees we see there now.

If you laid out the strands of 2017’s National Christmas Tree lights in a straight line, they would stretch the length of three Washington Monuments! Good heavens!

I’ve learned so much about Christmas tree history while writing this article for you, and everything I’ve learned makes our own Christmas tree even more special to me. Above all, I intend to sing Christmas carols very loudly while I sit by the tree as a deliberate snub to Oliver Cromwell! Hmph!

Brandon held our tree’s _______ while the machine shook out the bugs and dead needles.

(By the way, do you like our tree? 🤗💚)#LearnEnglish #English #Vocabulary pic.twitter.com/Hc2SJFa8mA