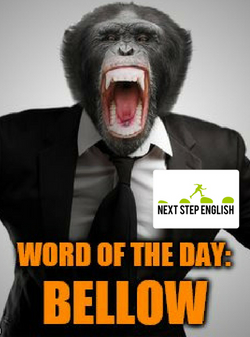 to shout in a loud, deep voice, especially because you are angry

🙂: Did you have a good time with Chuck and Linda over the weekend?

😬: Good grief, no. Linda was in a horrible mood. She only opened her mouth to bellow, and Chuck just retreated to the porch, leaving me to bear the brunt of it.

🤬: You need to clean this mess up right now!

🤨: You don’t have to bellow orders at me, John. You get more flies with honey than with vinegar, you know.

Examples of ‘Bellow’ from the News

“There was, however, no meeting of the minds whatsoever with Labour’s Iain Gray – who bellowed his fury that parliament’s will was being defied. Mr Swinney roared back with an accusation that Mr Gray was only interested in politics, not pupils. Mr Gray seethed, indignantly.”
– Brian Taylor, “Day of the deputies at Holyrood”, 25 October 2018

“‘My voice is better than it was but it’s still rough,’ he said. ‘Some criers seem to be able to bellow for as long as they like and it doesn’t affect them at all. I’m not too bad usually but in the final round, I could feel it was already pretty hoarse.'”
– BBC News, “Wiltshire town crier ‘first Brit’ to win international title”, 29 April 2015

Special Notes on the Word ‘Bellow’

In a literal sense, bellowing is something that bulls, moose, and some other large animals do. When a bull bellows, it makes a loud, deep sound. Here is an example from the news:

“He said: ‘As Scottish red deer are grazers, visitors often expect them to be tranquil and docile, so they get quite a shock when the rutting season arrives and the males start to bellow and roar.'”
– BBC News, “Highland Wildlife Park’s stag rut champ lives up to name Thor”, 30 October 2013

While you don’t need to know this literal meaning to use the word correctly, knowing this helps you understand even more specifically what we mean when we say that someone bellows. If Reginald is bellowing orders at John, he sounds like a big, angry bull as he shouts orders at John.

Related: If someone is bellowing at you, you probably don’t want to be around them! Check out this post to learn 10 ways to tell someone to go away.