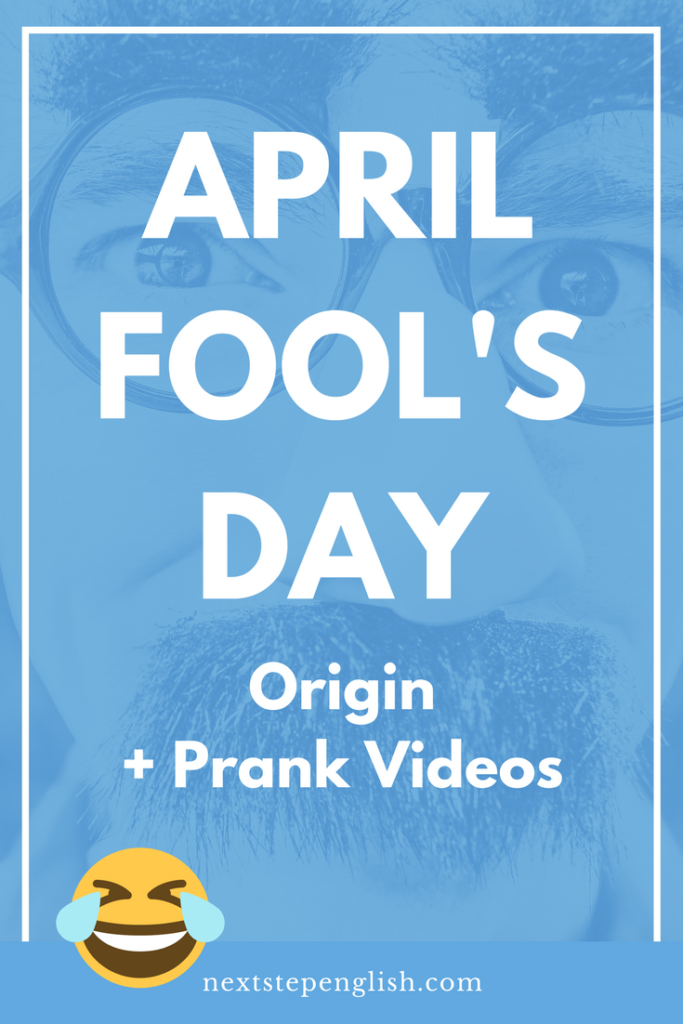 1. Where did April Fool’s Day come from?

So, what is the origin of April Fool’s Day? The short answer is: I don’t know.

The long answer? Well, there are a lot of different theories!

Some people think that April Fool’s Day may be related to the Ancient Roman festival Hilaria. Towards the end of the festival—near the end of March—people wore costumes and could pretend to be other people, even government officials. Other historians think that April’s Fool Day comes from the changing of the seasons, from the idea that nature is fooling people with unpredictable weather.

One of the most popular theories is that April Fool’s Day originated in 1582, when France switched from the Julian calendar to the Gregorian calendar. (Not sure what the Julian and Gregorian calendars are? Read about them here!) Leap years and daylight savings time cause enough confusion. Can you imagine having the entire calendar change? Understandably, a lot of people got confused! Some historians believe that these poor, confused individuals were the original “April fools”.

April Fool’s Day became popular in Britain in the 1700s. Look at how Scotland celebrated this fun holiday, according to History.com:

“In Scotland, the tradition became a two-day event, starting with “hunting the gowk,” in which people were sent on phony errands (gowk is a word for cuckoo bird, a symbol for fool) and followed by Tailie Day, which involved pranks played on people’s derrieres, such as pinning fake tails or “kick me” signs on them.”

I knew I liked Scotland! 😅

To learn all kinds of delightful details about the history of April Fool’s Day, check out History.com’s full post about this mischievous holiday!

2. Some funny April Fool’s Day prank ideas. And what is a prank, anyway?

Are you interested in celebrating April Fool’s Day this year? You’ll need to brainstorm some prank ideas in advance!

Maybe you like the idea of planting a whoopee cushion on your friend’s seat.

Or maybe you’re in the mood to prank call your teacher or an ex-boss!

For some really creative ideas, look up YouTube videos of the classic American TV show, Candid Camera. One classic Candid Camera prank is the rice-only buffet!

Just for Laughs: Gags is a Canadian show of practical jokes, and it is spectacularly funny! YouTube is full of their pranks, too. Here’s one that will make you laugh your head off!

If you’ve gotten this far, I think you know what a prank is. But just to be sure, here’s the definition! With so many great pranks to choose from, I bet you’re wondering how I could possibly decide on a favorite. Well, the BBC made it easy for me, plus their April Fool’s Day prank makes for great listening practice!

On April 1, 1957, the BBC broadcast this short segment about… the spaghetti harvest in Switzerland! They played it exactly as if it were a documentary. This clip features a lot of advanced vocabulary, but watch it and try to infer the meanings of the words you don’t know. Can you imagine seeing this on TV?!

They played this joke on the entire public! I love, love, love this prank! Yay for the BBC!

Want more laughs? Learn advanced English make-up vocabulary as my sister and I do the blindfolded make-up challenge! 💄

I’ve known about the spaghetti harvest prank since I was a child, but when I was searching for the clip for you, I discovered that the BBC played another prank more recently! They made another video to fool us all on April 1st, this time in 2008! (This is one of the things I love about doing Next Step English. When I research topics for you, I end up learning things, too!)

Have you ever heard of these spectacular flying penguins? 🐧🤣

Still need more laughs? Watch my sister push me in the pool every time I don’t know an American teen slang word! 👙💦 (Proof that English teachers don’t know everything!)

Will you do anything to trick your friends and family on April 1st? Make sure to plan in advance so that you have a high chance of actually fooling them! Hehe, what a great holiday. 😁